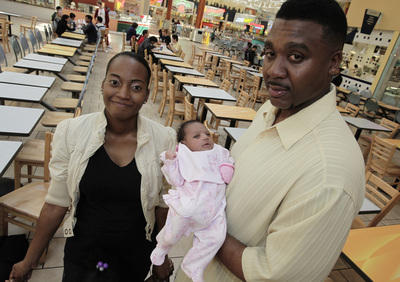 February 11th is a day that many, who were shopping at the Great Mall in Milipitas, will remember after they were greeted at the Food Court quite unexpectedly by the wails and cries of a newborn.

Remembering the most adventurous mall visits of her life, Evelyn Alexander, 33, the mother of the infant said, “I was just out with my family and she was just ready to come out. I thought it was something else, maybe something I ate.”

Evelyn had actually just got herself a meal from McDonalds with her fiancee Maurice Shepherd, 31 and taken a table. When she started feeling contractions another mall goer called 911. Paramedics arrived, took her vitals and then left after the mom-to-be told them she was fine.

But Kennedy was certainly not waiting. As soon as the paramedics left, her mother’s water broke. The medics returned, put Evelyn in a gurney and rolled towards the exit as Maurice ran by his fiancee’s side. The rush did not help though as baby Kennedy made the Great Mall her one-of-a-kind birthplace.

Now, one month later, the mall arranged a special party for the unexpected arrival where Gayle Speare, the GM, presented Kennedy with a basket of goodies handpicked from the mall stores.

“I’ll just remember it as something special, an interesting experience,” Alexander said. “She’ll have this story to tell her whole life.”

Grandmothers Gwendolyn Bruton and Evelyn Jackson, who witnessed the celebration as their little angel slept, could not help commenting, “This baby was born to shop!” – Atula, Staff Writer