Babies…  Little impatient beings that will arrive when and where they please..  Planes, trains, automobiles, and in the case of an Australian baby – even boats!

Baby Sophie’s place of birth could be listed as Moreton Bay, somewhere between Russell Island and the mainland after the newborn arrived on an ambulance ferry that was shuttling her mom to the hospital. 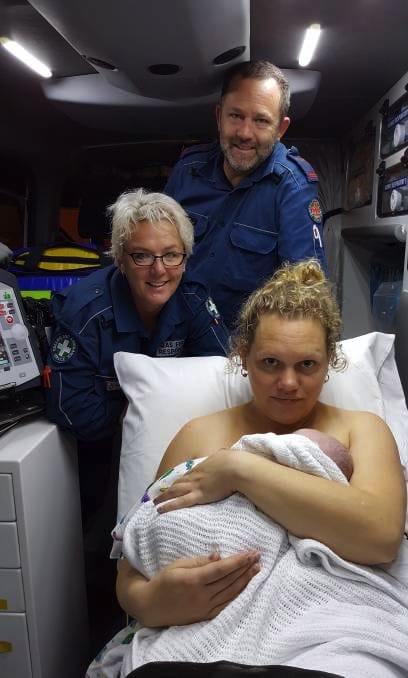 Amy Gibson went into labour just after 2am on Thursday, June 16, but was told by her midwife to monitor the contractions and call again in an hour.

An hour later, however, her baby in waiting was not going to wait much longer and the labour started to progress quickly.

At 3am Amy’s partner Jesse Rasmussen called emergency services for assistance.  Not knowing if they could get a team there in time, the call centre started to prepare him to deliver the baby.

But when the ambulance ferry arrived about 10 minutes later, the couple boarded in hopes of getting to the hospital for the delivery.  Baby Sophie is Amy’s third child and the last baby was born by caesarean so there was a possibility this baby would have to be delivered by surgery as well.  The mom-to-be was also told that her baby was possibly in a breech position, which added another layer of concern.

“We got into the ambulance and then to the boat and I was saying that I couldn’t have her there because of my fears,” Amy told The Redland City Boulletin.  “But 10 minutes in, Sophie decided that she was not waiting.”

Paramedic Simon Hansson was substituting for another paramedic so delivering a baby was the last thing he expected during the trip.

He has delivered about six babies before, but never on water.

When the ambulance arrived at the ferry terminal, Amy, Jesse and Baby Sophie were rushed to Redlands Hospital where mom and baby passed all checks.