Home » Baby Born At 22 Weeks Saved By a Ziplock Bag

When Baby Allegra was born at 22 weeks and 4 days, all that the medical staff could do was to keep the baby breathing and keep her safe. Doctors in South Africa therefore kept her in a ziplock bag for the first three days of her life and ensured that the tiny miracle survived. 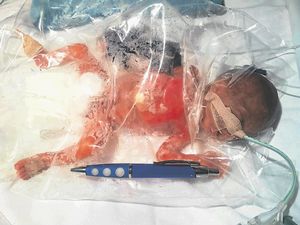 Baby Allegra Letagan weighed only 553 grams at birth and that included the weight of the many tubes passing in and out of her body. Her skin was paper thin and to keep the fragile body safe and moisturized, doctors at the Netcare Blaauwberg Hospital in Capetown decided to keep her inside a ziplock bag for the first three days.

Gradually getting stronger, the baby is now 42 days old and hopes of her survival have increased tremendously.

Speaking about the baby, neonatologist Ricky Dippenaar pointed out that she is the first of her kind medical miracle in South Africa.

“Little Allegra was the first live child born to her parents, who were desperate for a child,” explains Dr Dippenaar. “Even though she was barely the size and length of a pen this was of little consequence. Our greatest concern was the fact that she was so underdeveloped as she was born just over half way through the natural gestation period. Generally babies born at less than 26 weeks are not considered viable.”

The doctor hopes that in the next few days her mother can hold baby Allegra for the very first time. She is currently receiving eight milliliter feeds every two hours and her drips have been removed.

The doctor says, “There’s no denying, we’ve had a very interesting time since her birth. At one stage we had to open her abdomen to resolve a bowel obstruction.”

But the biggest challenge was to keep her still developing skin intact.

“By far the greatest challenge was the need to keep her body and skin fully hydrated. There are multiple layers to the human skin. However, in Allegra’s case the skin was still developing and it existed in literally one or two very fine layers that resembled tissue paper. Her skin was so fragile that movement against the ziplock plastic bag abraded her skin so that it bled.”

The major turning point, however, was when Medhold gave the hospital a Giraffe incubator on loan. Unlike a normal incubator this one creates a humidified environment which according to the doctor is needed to restore the fluid equilibrium of preemies. 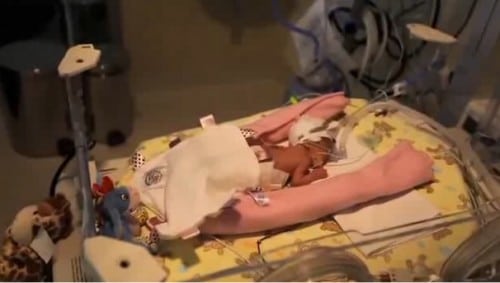 “It is not just state-of-the-art equipment and expertise that are required in caring for children,” Dr Dippenaar explained in an interview. “Absolute vigilance and a great deal of time and dedicated care is needed. Our work is very labour and time intensive and there are days when the staff and I have to put our lives on hold. We nevertheless love what we do. Each patient is different and has special needs. In each case we have to adapt our approach to their needs. The team needs to be proactive and dedicated. It is challenging, fascinating and most rewarding work.”

Thanks to the efforts of this dedicated team of doctors at Cape town one fragile life was saved.

Allegra’s daily milestones have been noted at timeslive. It is amazing to read that it took 29 days for her to open her eyes.

It is also worth nothing that most hospitals in North America who look after premature babies have a giraffe bed in their NICU for very tiny babies.  They do, however, cost approximately $50,000, which is a tall expense for smaller or remote hospitals.