Jessica Wynter was rushing to the hospital when she went into labor one week early. But little did she know that the baby had decided to arrive right at the hospital parking lot, safely inside his mom’s onesie! 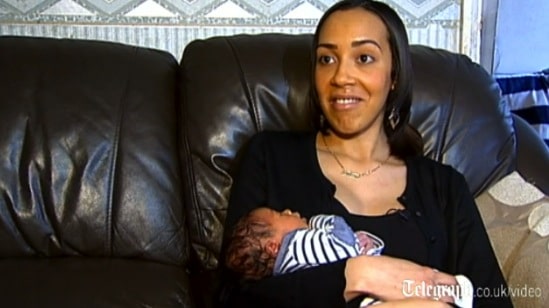 The new mom describes the moment her son Kye was born as ‘curled up in the right leg, safe and sound’.

On December 27th she woke up from sleep with serious back pain. It was three in the morning. Jessica, however, continued to bear the pain until 5.30 in the evening when she decided to take a hot bath to sooth the backache. It was then that she realized that it was labor pain that she was experiencing.

Her mother Christine and father Davonne helped Jessica get into the car to take her to the King’s College Hospital, in Lambeth, south London. Jessica had put on a polka dotted adult onesie for added comfort.

Jessica says, “We left around half five in the afternoon. I was yelling “He’s here he’s here. I was in the back seat of the car screaming my heart out.”

“I was really frightened and in pain and I kept worrying we would be stopped because I had no seatbelt.”

At the hospital car park however, the family was in for an adventure. Her father parked up in the drop off area but after she got out of the car Jessica had difficulty moving towards the hospital. She could feel her water had broken when she ‘felt like a rubber duck slapped across my leg’.

Within minutes baby Kye was born and his mom’s choice of clothing saved him from hitting the floor. The onesie, a full piece jumper was in fact a Christmas present given to Jessica by her grandmother Enid.

She said, “I got up because I wasn’t in pain any more. My mum came over and we could both hear crying coming from inside. I unzipped the onesie and Kye was curled up in the right leg, safe and sound. He looked really happy just sitting there.”

Jessica is a Coventry University design student, from Streatham. On Tuesday she recalled the moments before the birth when she realized that the back pain she felt all day was actually labor pain.

“My contractions were nearly five minutes apart and my back was in agony – I realised I was in labour. It was really scary. I went in the bath a couple of times for the pain. By the time dad got home I knew that we had to go to the hospital.”

After Kye was born, 8 hospital doctors rushed to help him and the new mom. One put a blanket around her to keep her warm before both were taken to the maternity ward. 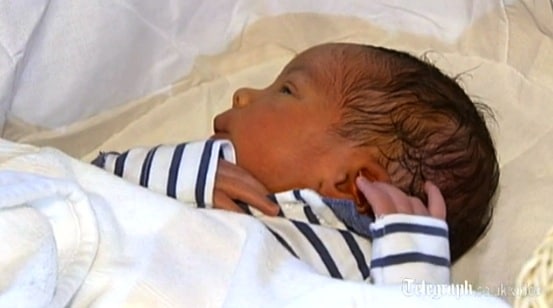 “His temperature was a little bit low because he was born outside but apart from that he seemed fine. He was born at 39 weeks, a week early,” said Jessica.

She also adds how it was a last minute decision to wear the onesie.

“I just threw on the onesie as I came out of the bath. It could have been anything else, it’s so lucky. If it had been something like a nightie I don’t think he would have survived. I was in so much shock when I saw him on my leg. I couldn’t believe it. I’ve got to keep the onesie in my keepsake box- it’s just so surreal. I’m sure I’ll tell him all about it when he’s older, probably as soon as he can talk.”

Kye was born at 6lb 5oz.  Despite his crazy arrival he was healthy enough to leave the hospital the same day with his mom. 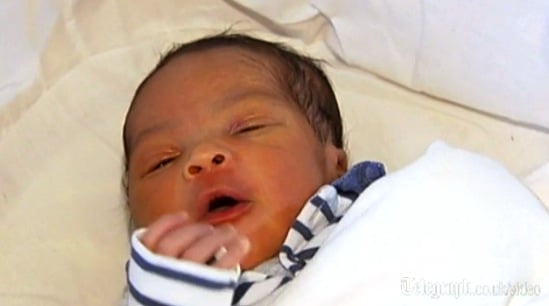 Granddad Davonne, 48, relives the adventurous entry of his grandson into the world,

“It’s a real shock to the system. When I was coming home from work I had no idea what was about to happen. I parked in the drop off area in the hospital and went to call the labour unit to let them know Jessica had arrived.

“I got back and she was on all fours in pain screaming. The next thing I knew, about eight medical staff appeared and it was all over. She thought she had given birth to the water sac, not the actual baby. We were all in a state of complete shock. If it had been a night dress who knows what could have happened, it’s such a blessing really.”

“I’m just thankful that she had the onesie on – it’s so lucky he’s safe. I’m sure lot’s of young mums are going to want them now.”

With babies arriving on days, times and venues when they feel is the right time to be born, the onesie certainly seems to be a sensible maternity wear.