Ah, babies and their lack of predictability . . . After a Southwest Airline Flight 623 took off from San Francisco, a baby decided it just couldn’t wait. 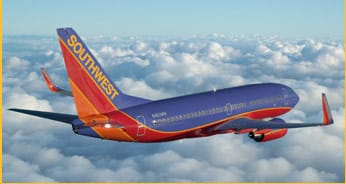 The airliner was headed for Phoenix when a woman went into labor. The flight crew along with a doctor and nurse that were aboard helped assist in bringing the new passenger aboard. Airline spokeswoman Emily Samuels says she hopes that the airline has a new customer for life.

Passengers said they had heard the call for a doctor, but weren’t aware of what the medical emergency was.

“One of the nurses that helped said [the mother] was like walking around, pacing the airport, so they were thinking she was having contractions,” fellow passenger, Julie Dafoe, told Phoenix TV station KTVK.

“All of a sudden, I heard a baby cry, like a gurgling sound, like a baby that had too much milk, or whatever, and I’m like, ‘There’s no babies on the flight,’” passenger Kurt Reed added.

“The captain announced congratulations for the arrival of this new baby boy,” another passenger, Aarti Shahani, told KTVK. “So we all started applauding, but it was confusing because we thought someone was going to die, not be born.”

After the delivery, which took place near Los Angeles, the plane landed and paramedics boarded the aircraft.  Fellow passengers were sent on to their destination aboard another plane while the original one was serviced and cleaned. Mother and baby were taken to the hospital, Los Angeles Fire Department spokesman Erik Scott said. Both are reported to be in good condition.