Home » Baby Born On The Lawn of Endicott Home 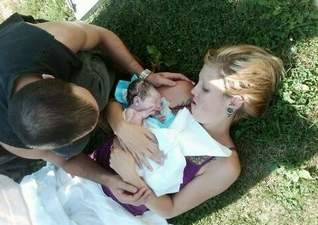 Little Layla Deering was eager to find out for herself if the grass is always greener on the other side.


Layla was so eager to see the world that she could not wait for her parents, Talia Burke and Nicholas Deering, to make it to the hospital. Instead Layla was born nine days early, on the front lawn of Nicholas’s grandmother house (Diane Woodard).
Earlier in the week Talia began having contractions. The couple made four trips to the emergency room, only to be told that she was not in labor. So on Saturday when Talia’s contractions started up again, the couple ignored them and went about their daily routine.
Just 10 minutes after Nicholas decided to prepare a hot bath to reduce the pain of her contractions Talia felt that it was time. While she called her mother to inform her of the news, Nicholas packed the car.


“I heard her scream and I ran”.
“She was lying in the front yard”.

Nicholas saw Talia lying on the front lawn and called for an ambulance. Approximately twenty seconds later her water broke.


The Endicott Fire Department paramedics arrived shortly after and successfully delivered baby Layla while Nicholas and his grandmother held up a sheet, doing their best to create a make shift emergency room.  The new dad cut the umbilical cord in the front yard and was the first to hold his new born baby girl, who weighed in at seven pounds and one ounce.