Home » Toddler to Donate Bone Marrow to Save Brother’s Life 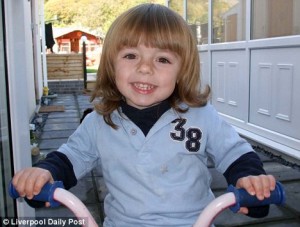 It is more than a hug that three year old Jaydon is preparing to give his elder brother Shane Owen Firth who is struggling with a life-threatening condition. Jaydon will be donating his bone marrow cells to save Shane’s life.

Shane was, until recently, an active 13 year old living in Penrhyndeudraeth, Gwynedd. He loved his football, says mom Amanda 33,

But one day the family noticed bruises on Shane’s skin. Tests revealed that he had aplastic anaemia a condition where the body’s bone marrow stop producing sufficient new cells. A bone marrow transplant could save his life and therefore his three siblings, Justin, eight, Jaydon and baby sister Kelsey – were tested for a bone marrow match. Only Jaydon’s was a match.

‘They are our heroes. Shane has been so brave throughout all this.When we needed a match for the bone marrow his brother Justin, who was eight, was desperate to help his brother but his match was not right. Jaydon’s match was and he says he is helping make a new Shane, he is happy to be helping his big brother.

‘We are now just praying that everything goes well.’

Shane will now be taken to Alder Hey Children’s Hospital in Liverpool where through chemotherapy all his bone marrow cells will be destroyed. Then Jaydon will be brought to the hospital for the transplant.

“It has been hell since then for the family and particularly Shane,” mom, Amanda says. “He has gone from being out all the time to having to live his life at home. The only good thing is that Shane says he will have two birthdays as you get a second birthday on the date you receive your new bone marrow.”

‘He hopes to be kicking a football by Christmas.’