Home » Baby On Board: Intern Delivers Baby on Train

Babies are known to arrive at unexpected times and sometimes in unusual places. Such was the case when a 24-year-old woman named Chitralekha went into sudden labor on the Ahmedabad-Puri Express Train in India. The young woman and her husband are laborers who were heading to Raipur. 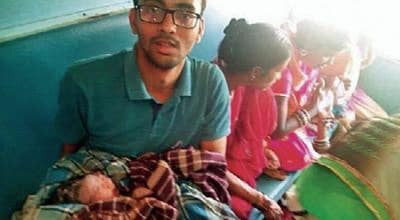 When her labor started suddenly, relatives traveling with the couple pulled the chain to halt the train near Wardha Junction.

The ticket collector and a train guard went passenger-to-passenger looking for a doctor to assist.

Assuming there would be a qualified doctor on board to help, another 24-year-old waited. Vipin Khadse is not yet a qualified doctor, but is in his final stage of MBBS training at Nagpur’s Government and Medical Hospital. When the train officials made a second pass asking for help, Vipin stepped up.

Passengers vacated a compartment and helped convert it into a makeshift delivery room.

When Vipin went to attend the young woman, she was in great pain and bleeding profusely. It was a complicated delivery for the young soon-to-be doctor who was assisted by a midwife who was also on the train. But Khadse, who aspires to be a surgeon, believes that every doctor should know how to help a woman in labor. He was about to get his chance.

How complicated was the delivery? Instead of the head crowning, the baby’s shoulders were hanging out of the vagina and the amniotic fluid had died up completely. Khadse uploaded a photo into a WhatsApp group of doctors, asking for help and getting an immediate response.

A senior resident, Shikha Malik, guided him over the phone throughout the delivery. Khadse used chilled water bottles to stop the bleeding.

When the train arrived at the station in Nagpur, a woman doctor from the railway hospital arrived with her team to take charge. The new parents were allowed to continue to their destination with mom on medication, and resting comfortably after a surprising delivery.