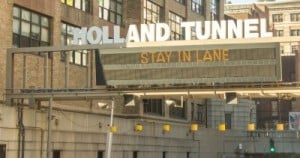 Soukaina Nekhlaoui still had six more weeks until her due date, but early Wednesday morning, labor pains kicked in. She and her partner, Abdel Elkarhat, left their home and started heading for the Lutheran Medical Center in Brooklyn, the same hospital where their daughter was born. But their son, little Nassim Mohammed Elkarhat, had other ideas on where he’d make his grand entrance into the world.

As Abdel drove through the Holland Tunnel, Soukaina’s labor pains suddenly intensified. When they reached the Manhattan side, he pulled their black Cadillac on to the side of the road.

PA senior tunnel and bridge officer, George McCann, a 52-year-old father of two had never delivered a baby before, but he rushed over to help the couple.

“The father was really frantic,” McCann told NY Daily News. “You could tell he was a new father. He was running around screaming ‘Help me! Help me!’”

According to McCann, little Nassim (whose name means “scent of a morning flower”) was blue when he first contacted emergency officials about the birth, but once placed on his mother’s chest, the tiny little boy started to open his eyes. McCann and his colleague, Jean Bernard, made a makeshift tent out of a wool blanket and administered oxygen to the little boy until city emergency responders arrived on the scene to cut the cord and transport mom and baby to the hospital.

Hours later, both mom and baby were reportedly doing well. Bernard and McCann went and visited them and presented mom with a Holland Tunnel cap.

“It was great,” Bernard told NY Daily News about the visit to the New York Downtown hospital. “The baby looked up, looked at us and was like, ‘Why are you bothering me? I want to go back to sleep.’”

Congratulations to the happy family on the safe, albeit, interesting delivery of their son!