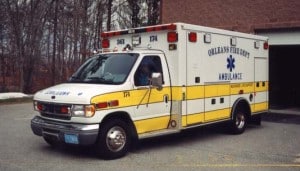 On the way to Cape Cod hospital, the mother’s water broke, just before Exit 11 on Route 6, a little before 8:21 a.m. on Saturday morning. It was at that time that the couple decided to stop off at the nearby fire station.

Present at the station were paramedics/firefighters Craig Thorton, Brad Willis, David LeBlanc, and Paul Finn. Once the couple arrived, they placed the 32-year-old mother on a stretcher and into the ambulance and started heading to the nearby hospital. Before they arrived, however, the mother stated that she “had a strong urge to push.”

Instead of fighting the urge, the mother pushed. And, at 8:24 am, the baby was born and the father cut the umbilical cord. Both mother and child are reportedly doing well and the emergency staff was thrilled to have an opportunity to be a part of the joyous event.