Parents are constantly reminded of car seat safety and the importance of proper installation. Still, children all across the country aren’t strapped in properly. Such was the case of a Surrey infant that was thrown from an SUV on Thursday.

The infant’s mother, Hira Khalid, 27, was driving in the Mount Vernon area that morning. From what she told police, she may have been distracted because her son had been fussing. She hadn’t noticed that her vehicle had started to drift to the shoulder until she hit a rumble strip. During her efforts to return to the lane, she lost control of the vehicle, crossed two lanes of traffic and struck a concrete barrier, rolling the SUV. 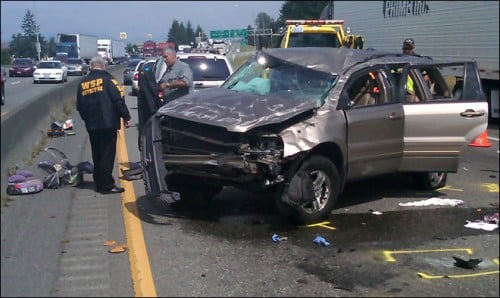 While the mother and her two daughters suffered only minor injuries during the crash, the infant faced a bleak prognosis. He was airlifted to Harbourview Medical Centre in Seattle. No one was sure if the infant would survive, having suffered head injuries.

During his interview, Trooper Keith Leary of the Washington State Patrol told reporters, “he landed in one place and the car seat landed in a different location.” The mother acknowledged that the seat was not installed properly and her daughters had been helping to buckle the infant into the seat and trying to calm him down.

Despite all odds, the infant seems to be “doing remarkably well” according to the intensive care unit nurses. He may even be discharged soon.

The mother’s problems, however, are far from over. She will reportedly face charges for improper lane travel and failure to secure a car seat properly.

Events like this happen entirely too often. While I am certain that the mother is filled with remorse and regret, there is no way to change things or take it back.

If you are unsure of whether or not your car seat is installed correctly, your local fire department, WIC office and even police department can help you check it and install it correctly, if need be. Car seats save countless lives and should be used every time your child or infant rides in the vehicle, no matter how short the journey.