Oliver Newman was only 1 pound, 12 ounces when he came into the world. The tiny preemie, born at 28 weeks, spends his days growing in an neonatal incubator at the Salmon Creek Legacy Hospital in Vancouver. 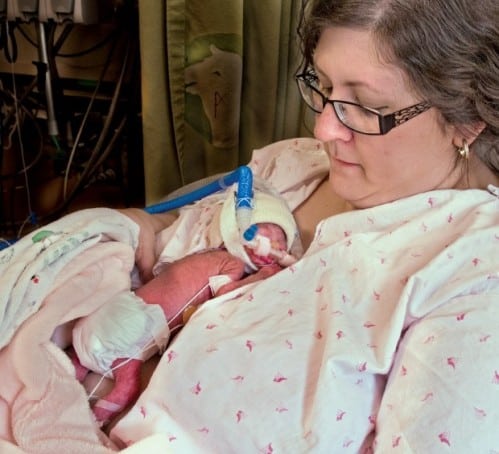 Tesha Newman woke up on February 15th with a raging headache. Already at risk for high blood pressure, she new the headache was a bad sign. After no signs of letting up, Tesha went to the hospital to be checked for pre-eclampsia. Once there, doctors discovered that her blood pressure was dangerously high while her tiny baby’s heart rate was dropping frequently. To save her life and the life of her baby, doctors had to perform a c-section despite Tesha being only 28 weeks along.

Now, tiny Oliver fights and grows inside a neonatal incubator for 22 hours each day. Being so premature, his parents can only hold him for 2 hours each day. The rest of the day he needs to sleep to continue putting on weight. For Tesha and Jeremy, the long wait is heartbreaking.

“We only touch him at certain times because they want him to sleep. That’s when he grows,” the 29-year-old Longview woman told TDN.com. “But it’s hard not to be able to hold him all the time or any time I want to.”

Because of Tesha’s pre-eclampsia, little Oliver was not growing as he should have in the womb, Despite being 28 weeks along, Oliver was only the size of a 26 week old. Pre-eclampsia can affect how the placenta functions, and can slow the growth of a developing fetus, causing problems in development and health.

There is no known cure for pre-eclampsia besides to give birth. Affecting around 5 percent of all pregnancies, this dangerous illness can be fatal if left untreated for too long. The only way to prevent this from happening is to induce labor early or perform a c-section. Both of these, however, can be dangerous for the unborn baby.

So far, Oliver has been doing good in the NICU care. He will undergo an ultrasound this week to determine if there have been any brain bleeds, a common occurrence in preterm infants. Oliver breaths through the help of a ventilator, and gets his mother’s breast milk fed to him through a tube.

“He’s up to 1.8 milliliters (just under a half teaspoon) that’s pushed very slowly throughout the hour into his tummy,” Tesha said. “They said the mother’s milk is the best because his stomach is so underdeveloped. We’re really encouraged that his tummy and bowels are working well enough to take that little bit.”

As long as Oliver keeps growing and doing well, he is scheduled to be sent home around mid-April. – Summer, staff writer