Home » Beyoncé’s Preparations for Birth Trumped by the Miracle 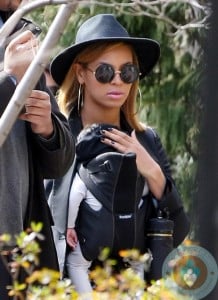 Nothing can ever really fully prepare you for the miracle of your first birth. Beyoncé discovered this first-hand as she primped and prepared for the arrival of baby Blue, only to find out that physical beauty isn’t what having a baby is about.

“I got my nails done, I got my feet done, had my hair done, and I had my little lip gloss,” she shares about her pre-delivery preparations, adding that she even had her eyebrows waxed beforehand.

But in the end, the miracle of welcoming Blue Ivy won out, leaving Beyoncé feeling a little less than beautiful.

“I didn’t feel that I looked beautiful during birth, but who does? After being pumped with all those fluids and gaining so much weight…I barely recognized myself,” she said. The focus on her appearance quickly shifted, however, as she held her beautiful baby girl. “But after many hours of labor, I could care less about anything but my child. I didn’t care how I looked.”

The experience of birth has changed her, she says, and for the better.

“I felt more powerful than I’ve ever felt in my life. I felt connected to my body. I felt like I knew my purpose in the world.”

Beyoncé also shared her post-baby body secrets and the magic of breastfeeding with People.

“I lost most of my weight from breastfeeding and I encourage women to do it; it’s just so good for the baby and good for yourself” says the singer who is now just a few pounds under her pre-pregnancy weight, despite gaining fifty pounds during pregnancy.

Breastfeeding wasn’t her only secret to weight loss, however. In addition to nursing baby Blue for about ten weeks, she shares that she started following a strict diet and exercise routine about a month after birth.

“I counted calories. I worked out maybe three to four times a week. I did a lot of walking in the beginning and now I’m running. But I had to work my way up. I couldn’t just go right from being pregnant to running.”

And while avoiding the cheats may have been hard, Beyoncé says that the hard work has paid off.

“I’m proud that my waist came back so fast. I’m proud of that and happy, but that was mostly from the breastfeeding.”

Having a baby added another beauty feature to her body as well, she shares.

“My hormones are still in my body. Your body produces the hormones that make your body soft. It’s just magical. It makes me so proud to be a woman because it’s just unexplainable what happens to your body – it’s incredible.”

Glad to hear breastfeeding helped her to lose some of that post-baby weight. Unfortunately, it doesn’t always work for everyone. But nursing does have many other benefits for mother and baby, even if weight loss doesn’t end up being one of them.