Human brains grow the fastest after birth, and within three months a baby’s brain maybe half the size of an adult, finds new research conducted by scientists at the University of California.

In a study published in JAMA Neurology, scientists say they used advanced scanning techniques to understand the growth of human brains. During their research, it was revealed that brains grow rapidly in the first three months of life, and usually, the male brains grow faster than that of female infants. 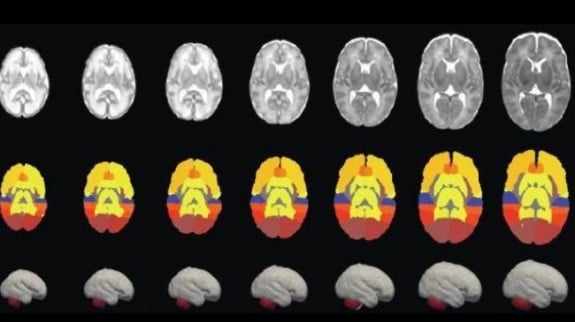 The scientists add that the areas of the brain involved in movement develop at the fastest pace whereas those associated with memory grow slowly.

The researchers believe this data could help understand brain development and detect early signs of developmental disorders such as autism.

For centuries, an infant’s brain development is noted for the first few months by charting the size of the head’s circumference measured with a tape in regular intervals. Any change in the set growth pattern is noted and doctors may do further tests based on these anomalies.

But often, brain sizes differ because of different shapes and this is not the most accurate way of noting a baby’s internal development of the brain.

Using the latest technology, the University of California researchers scanned the brains of 87 healthy babies from birth to three months.

They found that the most development occurred right after birth where newborn brains grew at the rate of 1 percent per day.

This growth rate slowed down to 0.4 percent per day at the end of the 90 days period.

The slowest region measured was the hippocampus, a structure that plays an important part in how memories are made.

Dr. Martin Ward Platt, a consultant pediatrician at the Royal Victoria Infirmary in Newcastle, who was not involved in the research said,

“This is the first time anyone has published accurate data about how babies’ brains grow that is not based on post-mortem studies or less effective scanning methods. The study should provide us with useful information as this is an important time in development.”

“We know, for example, if there are difficulties around the time of birth, a baby’s growth can fall away in the first few months.”

The research confirms that it could be a vital tool in understanding developmental issues. In babies who were born early, the team found that the brain size was 4 percent smaller than those born full term. Although these brains developed at a quicker rate than the full-term baby brains, they were still 2 percent smaller at the end of the three months.

The next phase of the research will see if alcohol or drug consumption alters the brain size in babies.