A breech position for delivery is when the infant’s buttocks or feet are in place to come out, rather than the head. This occurs in about 1 in 25 births, and it often results in a sudden change in delivery plans; the baby is generally delivered via cesarean section. While probably disheartening for mothers that were hoping to deliver vaginally, a new study suggests that this is, by far, the safest birth option for breech babies. 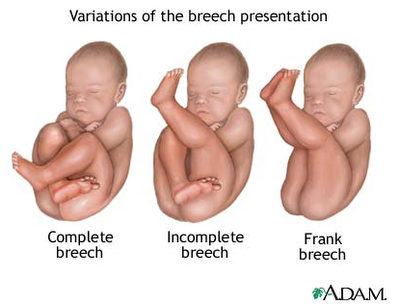 Led by Dr. Floortje Vlemmix of the Department of Obstetrics and Gynecology at the Academic Medical Center, the University of Amsterdam in the Netherlands, the research team assessed birth outcomes of 58,320 women who delivered single breech babies between 37 and 42 weeks’ gestation at hospitals in the Netherlands between 1999 and 2007.

Dr. Vlemmix said that, regardless of prior evidence suggesting that cesarean sections improve the outcomes of breech deliveries, about 40% of all women still choose to attempt a vaginal delivery. Those deliveries result in 10-fold higher mortality risk than even elective cesareans.

“Despite the lower percentage of women opting for or offered a vaginal delivery, and despite a higher emergency cesarean rate during vaginal breech birth, neonatal outcome with the planned vaginal birth group did not improve,” researchers told Medical News Today.

Researchers noted that mothers who delivered stillborn babies or infants with defects were excluded from the study.

Of course, there are some concerns about the increase in elective cesarean births. Some studies have shown that there are risks – not just to the baby, but also to the mother. And this concern does carry some weight, considering elective cesareans are on the rise, going from just 20.7% to 32.9% of all births from 1996 to 2009 in the United States, and from 50% to 78% in the Netherlands from 2000 to 2008.

But as far as breech births go, Dr. Vlemmix says that the evidence is clear: cesarean is the least risky for baby, and he feels that mothers should be educated as to how, when, and why a vaginal delivery birth plan should be changed to ensure the safety of their child.

“Our findings suggest there is still room for improvement to prevent unnecessary risk to the infant,” he said. “We recommend using measures to turn the baby (external cephalic version) to prevent breech presentation at birth and counseling women who want to proceed with a vaginal birth.”