Home » Pregnancy Health – Can I Drink Kombucha While Pregnant?

If you love kombucha and have recently discovered you’re pregnant, you may be wondering if you can still enjoy your “mushroom tea,” or if you’ll have to give it up.

A brief internet search fails to provide a clear answer on the safety of kombucha, especially during pregnancy. Even the experts are conflicted. Some say that the risks of consuming kombucha during pregnancy are just too great. Others say it is perfectly safe, so long as you’ve had it before and you don’t overdo it (they recommend either adding a small amount to a glass of water or drinking no more than a couple of ounces per day). 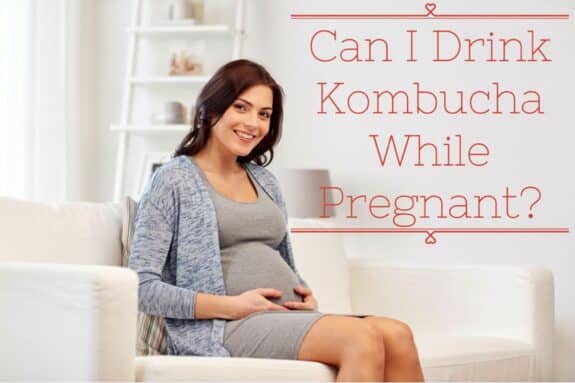 Who is correct, and what does science have to say about the matter? Keep reading to find out.

What is Kombucha, Exactly?

Made by mixing black, green, or oolong tea with refined sugar and bacteria or yeast, kombucha is a fermented drink with many purported health benefits. People from all cultures and backgrounds have been making fermented drinks like kombucha for years, but it has only recently made its way into the kitchens of health-conscious Americans and Canadians.

Why is Everyone Drinking It?

Like most fermented foods, kombucha contains probiotics, which have been linked to healthy gut bacteria in clinical studies. Some say that beneficial bacteria colonies in the gut can improve everything from bowel movements to immunity and overall wellness. However, there is not enough science to make such an unequivocal statement.

Kombucha also contains B vitamins, which are deposited into the tea during the fermentation process. This essential nutrient is needed by everyone, but it is especially important for expectant mothers. If considering this fact alone, kombucha consumption during pregnancy may seem like a smart thing. However, there are other factors that pregnant women should consider before grabbing a kombucha at the store or starting their own SCOBY.

When it comes to the safety of kombucha, experts have two major concerns. First, there is the alcohol content, which some say could compromise the health of a developing fetus. However, there are many health advocates who say it is next to impossible to consume enough kombucha to create any serious issues – even when consuming commercial kombucha drinks that purportedly have over the maximum allowable alcohol. They say it is because the alcohol is a part of the natural breakdown process, and that it is no different than the alcohol that can be found in ripening fruits. Furthermore, homebrewers have more control over the alcohol content, so the argument may be invalid for those that make their own.

Another concern is the potential exposure to harmful bacteria. Most likely to occur in homebrews, exposure can be caused by a contamination of the SCOBY or mold growth. Allergic reactions to mold and live cultures – some of which could be harmful – have also been associated with the consumption of kombucha tea. One can avoid the risk by purchasing a commercial kombucha drink, but experts say that the beneficial bacteria may not survive the pasteurization process, which may make consuming the beverage rather pointless.

The possible consumption of B vitamins and probiotics are not the only purported benefits of consuming kombucha. Many say they feel a “boost” after consuming kombucha, and most say it helps improve their energy levels, which can be especially helpful for expectant mothers. It should also be noted that pregnant women have used kombucha to alleviate everything from morning sickness to constipation. Are the benefits real? Perhaps, but some may also be inflated. In either case, one should understand that the purported benefits could be achieved through a placebo effect. At the very least, claims over the amazing health benefits of kombucha may be at least slightly inflated. Consider this when deciding if it is appropriate to continue your daily consumption habit.

Drink with Caution and Know the Risks

Although kombucha is unlikely to cause a serious issue for most expectant mothers, one must consider all the potential risks and weigh them against the possible benefits. Our research has led us to the following conclusion: Though drinking kombucha during pregnancy may not be inherently dangerous for most – particularly for those who already consume it on a regular basis – it is something that should be discussed with a physician. Furthermore, those that have never had kombucha may decide it is best to wait until after the end of their pregnancy to try it.