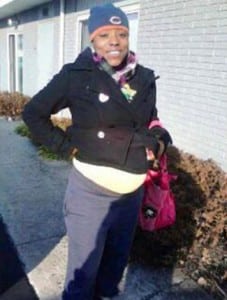 When a Chicago mom went into labour on Tuesday morning she wasn’t going to let that keep her from casting her vote.

Pregnant with her first child, Galicia Malone’s water broke at 3 a.m., but she held off going to the hospital until she was able to go to her polling place and vote.

“I never voted before so this made a major difference in my life,” she told CBS Chicago “And I wanted this to be a stepping-stone for my daughter.”

With her contractions 5 minutes apart Galicia worked her way through the ballot and then drove herself to the hospital.

She calls it a milestone day; her first vote and her first child.

“If only all voters showed such determination to vote,” Cook County Clerk David Orr said in a statement. “My hat goes off to Galicia for not letting anything get in the way of voting. What a terrific example she is showing for the next generation, especially her new son or daughter.”

While there is no word on when her baby was delivered, we wish her luck!