A grandmother in China is overjoyed that her beloved grandson will soon be getting the help that he so desperately needs. The toddler, Yuan Dingkang currently has a tumor the size of a melon growing on his bottom. Weighing nearly as much as the nine month-old boy, the pediatric teratoma was not visible during the pregnancy, and there was no evidence of anything unusual. A teratoma is a tumor made up of germ cells and they often grow near the bottom of the spine. 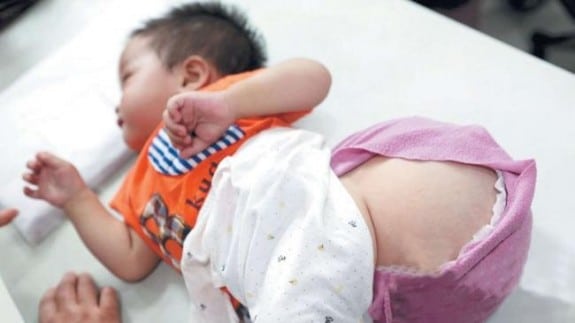 However, once the child was born, his mother, Lin Meng, abandoned him just mere days after his arrival, evidently ashamed at the boy’s deformity. His grandmother, You Yin says, “She waited until she was discharged from hospital, and then sneaked out in the night and never came back. She was unhappy about the boy’s deformity but we were shocked that she just decided to abandon him – he is such a sweet child. We spent all of the money we had on treatment and borrowed money as well. Went to many bigger hospitals most of which were unable to help and all the time the tumour kept getting bigger.” Yuan is now under the care of his grandparents and father, You Shen. Currently, the tumor is about the size of a football.

The family visited many area hospitals in hopes of receiving help for the child, but to no avail. In the days following Yuan’s birth, doctors did insert a fistula to help the child defecate, but the tumor continued to grow at a rapid rate. However, once the tumor had reached a certain diameter, the little one’s story was picked up by the media, and since then, donations have been flooding in, and little Yuan will soon be receiving the surgery he needs to remove the tumor.

Quanzhou Children’s Hospital have accepted the toddler for the operation. The staff is optimistic that the growth can be removed safely with surgery, and are certain that he will make a full recovery and lead a normal life. The boy was admitted to the hospital on June 28, where he is being prepared for surgery.