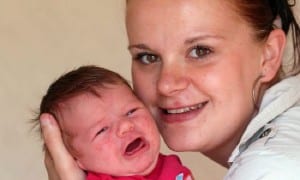 They were busy with their work on the new Christie unit in Salford, just outside of Manchester,  when construction workers helped with a labor much more urgent.

24-year-old Roxanne Sarr went into labor on the morning of 4 August. Being a mother to five year old Christopher and three year old Junior she assumed from past experience that she had plenty of time and therefore she and her partner Chris, 31 waited patiently for their grandmother Joanne Sarr who was to take them to the Salford Royal. But by the time they reached the hospital grounds, Roxanne was in hard labour.

She said: “I just screamed at them to go in the Stott Lane entrance because that was where I went in when I had the other two children. Unfortunately, the maternity entrance has been moved and by the time we realised our mistake, the baby was almost out.”

There was no time to lose for the family. Roxanne was in the back of the car with her grandmother and Chris leaned from the front to pull the baby out as their friend maneuvered the car and pulled the brake. Soon Roxanne had given birth to a beautiful 7lb 13oz baby daughter. And because all the baby’s clothes were in a suitcase in the trunk they had to wrap her in grandma’s cardigan.

Nearby, construction workers were working on a new site for a radiotherapy centre. When they saw the car and realized what was happening, the workmen stopped work and as soon as they heard the baby, started cheering and applauding. Moments later they broke the safety fence to help the new mom.

Roxanne said, “The men were absolutely marvellous. They stood back respectfully as I was giving birth in the car and cheered and applauded when the baby arrived. Then they tore down the safety fences and physically lifted me and Skye in a wheelchair over the rubble into maternity.”

The midwives had arrived soon after the baby was born to cut the umbilical cord, but the workmen realized that it was important for the mother and the child to be safely in the hospital and to speed the process up they airlifted the wheelchair carrying both into the maternity unit.

“I have 19 years experience in the construction industry delivering projects but when I came to work that day I never thought I was going to be helping to deliver a baby. I have two children myself so I didn’t panic and was just thinking about the safety of the mother and baby.

“It was important that they were taken to the maternity unit as quickly as possible so myself and a colleague carried the mother in her wheelchair into the hospital. I’m just pleased that we could help and that they are safe and well.”

The workers later even managed to club together and present the new mom with a bouquet.

“When they came back later with the flowers, I just burst into tears.” said Roxanne. Now she and her partner are planning to call the baby girl Skye Christie after the unusual way she arrived into the world. – Atula, Staff Writer