Home » Could A Simple Kiss Give Your Baby Cavities? 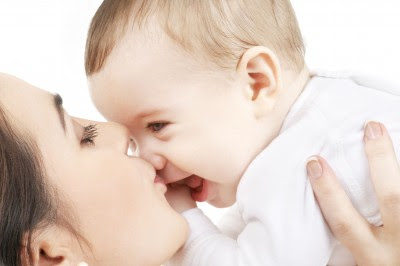 An interesting study that looked at different researches conducted over the last 30 years suggests that kissing a child is one way of transmitting cavity-causing bacteria from mom to baby.

A bacterium known as Streptococcus mutans is the primary reason for these tooth cavities. It can be easily transmitted from person to person by saliva transfer, sharing utensils, sharing food and even kissing a baby on the mouth.

A 2008 study confirmed that mothers are the primary sources of transmitting these bacteria to their babies.

According to Dr. Jane Soxman, a paediatric dentist,

“There have been many, many studies. It’s well-documented. You can’t blame it all on kissing a child on the lips — that’s one of several different factors that would have to be working together. But the main thing to know is that tooth decay is a bacterial infection and you can spread it from one person to another during the window of infectivity, which is during infancy and especially during the time of tooth eruption. That’s when the teeth are most vulnerable. It’s as if you had a bad cold and were kissing your child, you would spread the cold virus.”

Good news is that the transmission may only occur when a person already has active cavities in their mouth. Because babies have very delicate and vulnerable enamel, when their teeth start to arrive, it is important to be extra careful during those times as once the bacteria gets in, it can even harm the permanent teeth of the child in later years.

Luckily, there are preventative measures that can help kick the bacteria to the curb. In 2010 a study in the Journal of Dental Research found that mothers who chew xylitol gums during the third trimester are less likely to transmit the bacteria to their babies.

“If a woman is decay-active, she should be chewing Xylitol in the third trimester so when the baby’s born, the chance of transmission of decay-causing bacteria will be reduced,” Dr. Soxman said “She should also have her teeth cleaned thoroughly during the second and third trimester.”

Dr. Stephanie Su, a paediatric dentist and mother of two from Redmond, Wash. offered this advice,

“When you look at a lab test, yes, there’s transfer of bacteria, but in real life, you’re not going to be able prevent that. You can’t live in a bubble. But you can maintain good hygiene practices and a good diet, and the parents can take care of their own oral health and focus on preventative care like flossing and dental checkups and chewing Xylitol gum if they’re at high risk for decay.”

Additionally, it is important to keep wiping your baby’s mouth, teeth and tongue with a wet clean cloth as regularly as you can, according to doctors. – Atula, Staff Writer