Little Gunner Wall made his entrance into the world after a dramatic dash to the hospital that included a long night drive, dad hitting a deer in the road, and the kindness of a stranger who brought his stranded parents to Winnipeg’s St. Boniface Hospital. 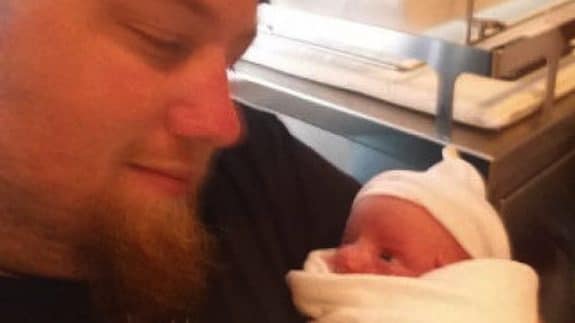 Mom Darlene Wall woke husband Shane at 4 a.m. on August 1st with the news that their baby was on the way. With their 3-year-old daughter Emma safely at grandma’s house, the couple hopped into their Chevy Equinox and started the long drive. They were in the car for more than a half hour and were just 10 minutes from the city when a deer leaped out of a grassy ditch onto the road in front of their car.

Shane, a former truck driver, says he knew what to do. He didn’t swerve or slow down, driving right into the animal and buckling the front right corner of his car. His main concern was for Darlene, who had been having contractions during the drive and let out a scream as the impact tightened her seat belt.

The couple remained calm, even realizing that time was running out.

Shane waved over the first vehicle that came along but it was packed with people and had no room for them, even if they could have communicated with the group who spoke no English. The next vehicle was a pickup truck, driven by a middle aged man traveling with his teenage son.

Shane told the man his wife was in labor and begged for a ride to the hospital. The driver – on his way to the airport to fly to northern Ontario for concrete work – rearranged some baggage to make room for the couple. On the dash to the hospital, Shane repeatedly thanked the man “about 50 times,” he says, and learned that the man’s own kids had also been born at St. Boniface Hospital.

Dropping the couple at the hospital door, their good Samaritan left before they ever got his name.

Gunner Isaac Wall was born at 4:31 p.m. weighing seven pounds, ten ounces. Both mom and baby made it through the night’s drama just fine.

Shane assumes that the deer was killed, and his Chevy is a total write-off. But his new son will have an interesting birth story to tell…one with a happy ending, thanks in large part to the kindness of strangers.