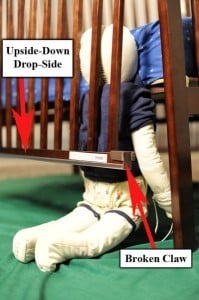 In the last 3 years the Consumer Product Safety Commission (CSPC) has recalled 11 million Drop-Side cribs due to entrapment, suffocation and fall risks. According to them  these cribs have been responsible for infant 32 deaths, ‘almost all of which resulted when a baby’s head or neck became entrapped after a malfunction of the drop-side crib mechanism’.

The new rules will make it illegal to sell a crib with sides that drop down or those that do not pass strict tests on the durability of slats and mattresses.

They will also make it illegal to sell second-hand cribs, since most will be unable to meet the tougher safety standards.

Commissioner Thomas Moore of the CPSC, in a statement Wednesday, called the new law an “important step to providing a much needed added measure of safety to our young children’s sleeping environment.

“The benefits of our action today will be saving the lives of innocent babies,” he said.

Even though the law goes into effect June 2011, hotels and childcare centers will have two years to replace existing cribs with new ones.

The new regulations, which now gives the United States the toughest crib standards in the world, are being welcomed by consumer groups.

“Parents and caregivers should have peace of mind when they leave their baby in a crib that their baby will be safe. For too long that has not been the case,” said Rachel Weintraub, director of product safety at the non-profit Consumer Federation of America.

“We congratulate CPSC for shepherding this strong and much needed consumer protection,” she said.