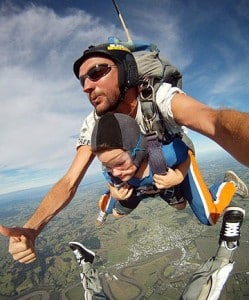 Until yesterday, Aaron Marriott, owner of Blueskies Skydiving, planned to take his two-year-old son out for his very first skydive. Little Elijah had been interested in doing his first jump since watching his older brother, Kobe, take his first jump just last year. At the time, Kobe was three. And according to his parents, Aaron and wife Elizabeth, Kobe “loved every minute of it.” Aaron has been in the business for more than 16 years and didn’t really see anything wrong with taking his son out.

But after “too much media hype,” Aaron and Elizabeth opted to cancel little Elijah’s first jump. As of yet, he has not commented as to whether or not Elijah will go up when he’s a little older.

Aaron wasn’t surprised by the fact that his decision had received so much media attention but he says that his sons are different than other children and he stands behind his former decision, despite the jump’s cancellation.

“They’ve seen hundreds of jumps, and to them, it’s normal,” Aaron said. “I don’t think I would take any other person’s child…It’s just something that I can do with my boys.”

Media wasn’t the only place that Aaron was getting some negative feedback from though. Even a family friend, Wendy Smith, says that the decision to take Elijah out at such a young age was a very bad idea.

Wendy, who has been in the tandem skydiving business for more than 20 years says that taking young children up is very risky. The youngest child she has ever taken up was four-years-old.

“It is not healthy for a child younger than perhaps 4 or 5 to do a tandem because the harness doesn’t fit their small body…It can imbalance them and actually cause them damage [in the brain],” said Wendy, adding, “We have to be very careful in the sport with letting very young children [go]. They still have a problem with structuring and growing of their brains. The freefall and the opening can cause quite a radical shift of the cerebral fluids.”

Other experts, like developmental pediatrician Dr. Rosemary Marks, president of the Pediatric Society and doctor at the Starship Children’s Hospital in Auckland, expressed their concerns about little Elijah’s  jump.

Dr. Marks pointed out that Elijah was still developing. She also felt that, while watching his older brother jump was definitely exciting, Elijah is still too young to understand what he’s getting into or the potential dangers that may be attached.

“As an adult, we know what is appropriate for children and what is not appropriate,” she said. “Just because a child asks for something…adults should have the wisdom to know what’s appropriate.”

While every parent does have the right to make their own decisions regarding their children, this is definitely a case in which the decision is wrong. Brain damage is permanent. It cannot be reversed. And, as the experts have discussed, the sheer force of a freefall could permanently damage little Elijah’s brain. I respect that Aaron is Elijah’s father and that it is ultimately his choice, but sometimes, we need to consider the safety of the child above all else. Nothing bad could possibly come of waiting a couple more years until Elijah is more developed and better understand the risks of jumping.