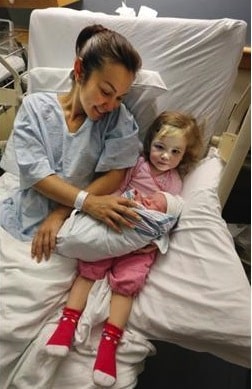 An Ottawa couple learned how quickly labour can progress after they were forced to welcome their second child in their car at the road side.

When Lola Meakin’s contractions began early morning at 7.00 am she decided to wait to head to the hospital until they were closer together. On their way, almost an hour later, a strong contraction made Lola realize the baby wasn’t going to wait.

“I had the feeling we’re not going to make it and then a big push and I felt the baby’s head,” she said.

Mike immediately called 911 for help, but before he could get any advice, his wife had already pushed the baby out.

“He was definitely very excited,” said Simon Vos, the paramedic who spoke with him. “They were driving to the hospital because she was … having contractions and then she just ended up delivering in the car. It’d be a shock to anyone, I’m sure.”

“The baby came out in three pushes and she came out in my hand… I was just there to catch,” said Mike Meakin. “I’d say I have to thank George Clooney. All those hours watching ER didn’t go to waste,” he added.

The 911 dispatcher later explained to the new mom how to clear the ear and nose of the newborn so that she could breathe. The emergency paramedics arrived to cut the umbilical cord and take the family to the hospital.

Lola says that if she ever plans to have a third baby, she would opt for pain killers. The new father also has some future plans.

The baby and mom are healthy and the family is looking forward to some restful sleep after the road side adventure.