Home » Study: Delay in Speech Does Not Hamper Development Later 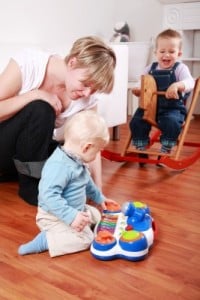 To hear their baby’s first word is perhaps for parents the most awaited stage of an infant’s development. But as anyone with kids would know, the time that a child starts speaking might be very different, even in siblings. A new study throws light on this very issue and ensures, that late talkers do not necessarily lack behind in everything later on.

According to a report published in the journal Pediatrics, children who show delay in speech by the age of two do not show any behavioral or emotional problems growing up or as adolescents when compared to children who started speaking at around the average time designated by experts.

The research conducted in Australia by Andrew Whitehouse, a psychologist at Telethon Institute for Child Health research at the University of Western Australia studied more than 13,00 children who were two years old and followed their developmental milestones till the age of 17.

At the age of two the researchers tested the vocabulary of each child with the help of a standard vocabulary test and those who fell below the 15 percentile mark were considered to be late talkers.

The researchers also asked parents to fill out questions regarding behavioral development of each child at five different ages. They asked about the kids’ emotional development as well, like whether they easily displayed their emotions or if they were more introverts or lashed out in frustration.

The scientists made the important discovery that while children who were late-talkers might have emotional behavioral problems at age 2, it did not continue to be so as they grew up.

The reason behind the emotional problems at the toddler stage, according to the researcher might be the child’s frustration to not be able to express himself freely because of lack of vocabulary. He stressed that they were not necessarily linked to other problems such as psychological disorders like depression or attention deficit disorder.

One important thing to come out of the research is the fact that it is perfectly normal for some children to be late-talkers than others and not all children must start talking when the reach the specific milestones set by pediatricians. It also comes as a major respite for parents who consider therapy and sessions with specialists when their child does not speak much by age of two.

“Parents should not be overly concerned that late-talking at age 2 years will result in enduring language and psychological difficulties for the child,” says Whitehouse. “There is good evidence that most late-talking children will ‘catch up’ to the language skills of other children.”

However, the researchers also caution that if kids do not start speaking by the time they start school, then parents do need to help them as that may hamper their future developments.

Whitehouse advices parents to interact with their babies as much as possible and introduce them to new environments and words as they grow.

“Get down on the floor and play with [your] child, talk with them, read to them and interact with them at their level,” he says.

With more communication children will automatically grasp new words and try to imitate them.