A 2-year-old Brazilian boy is being treated by doctors after he was found to have as many as 50 metal sewing needles inside his body. A doctor treating the toddler said they were apparently stuck there one by one. 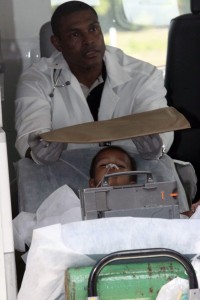 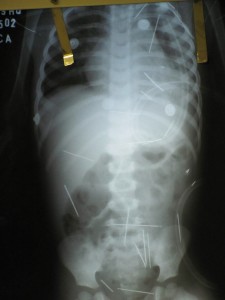 Dr. Luiz Cesar Soltoski told reporters that surgeons hope to remove most of the needles — some as long as 2 inches (5 centimeters) — but because some are stuck in his lungs, they have to wait until the child’s breathing improves.

He also added that some cannot be removed as they are too close to vital organs or actually inside them.

The boy’s mother, a maid, brought him to a hospital last Thursday saying he was complaining of pain. Three days later, after X-rays revealed some of the needles, doctors had him moved to a larger hospital nearby.

Even though the little boy’s mom told police she doesn’t know how the needles got inside her son, police have detained an ex-stepfather. At this point it is believed the needles were stuck into the tot’s body one by one because it would have been impossible for him to swallow them.

“We think it could have only been by penetration because we found needles in the lung, the left leg and in different parts of the thorax. It couldn’t have been by ingestion,” Soltoski said.

Doctors didn’t find any signs of outside wounds on the boy, but X-ray images clearly showed some of the needles inside his body.