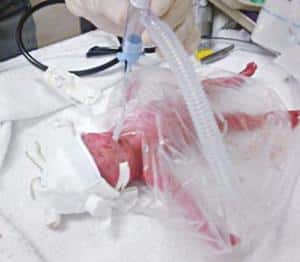 Everyday, all around the world, doctors are doing everything they can to keep extremely premature babies alive. The treatment of these babies has often been called experimental because they are so fetal, it sometimes takes unconventional methods to help them thrive.

To increase tiny Lexi Lacey’s chances of survival, UK doctors placed the baby girl in a sandwich bag.  Because she was so small, it was the best way to help her maintain her temperature.

When parents Chelsea Rowberry and Lee Lacey, were told that Lexi was most premature baby born at Worcestershire Royal Hospital, they were warned that it was unlikely that she would survive.

Arriving at 26 weeks, Lexi weighed just 14 ounces. But to everyone’s surprise this little fighter has shown everyone that she has bigger plans. During her 11 weeks in the NICU the tiny baby has battled against all the odds and pulled through.

Chelsea was at her brother’s home when she started having contractions on Sunday, June 27.

“It was frightening. I rang the maternity suite and they just told me to go to sleep,” she said.

Fearing she could be having a miscarriage, she called her mother, who called an ambulance.

When they got to the hospital, Miss Rowberry was told that she was already three centimetres dilated and she gave birth to Lexi who weighed just 14 ounces.

Lexi has now been given the all clear, but the couple says they still get scared because she is still so small, weighing just 5lbs 6oz.

Seventeen-year-old Chelsea, said some people were still wary about enquiring about the baby, fearing that she had not survived.

“People look quite shocked when I tell them she’s OK, a lot of people didn’t like to speak to me at first,” she said.

“But when they see her now people don’t believe me when I tell them how premature she was.”

Natalie Weston, founder of the support group Calling All Little Miracles (CALM) based at the Lavendar Children’s Centre in Warndon, Worcester, said:

“It is very rare for a baby that young to survive, but every year the survival rate for premature babies is getting better because of the research being carried out.

“The knowledge and technology is becoming more advanced and the basic thing is that babies are getting more help to survive.”

We wish this family well. Even though Lexi is out of the woods medically, she will more than likely need a lot of therapy to help her meet her developmental milestones. Babies born this premature often need help well into their pre-school years.