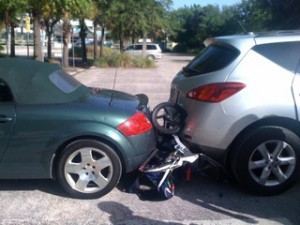 A super strong double stroller is being credited with saving two toddlers after an SUV began rolling backwards onto them. The Bob Revolution stroller showed its strength and protected the two when the rolling car slammed them into another parked car.

Kellie Knight had just loaded her two-year-old son Alex and 11 month-old daughter Mallory into the stroller, when her SUV began rolling backwards. Other parents in the Florida Aquarium parking lot immediately began calling 911, as the large vehicle rolled over the stroller and wedged it into the car parked directly behind.

Surprisingly, when the police arrived they found the two toddlers were alive and well. The sturdy stroller held up against the accident and protected the younger child, while the older had been thrown from the stroller. He only suffered a slight burn on his leg from the car’s exhaust pipe. The wheels and frame of the stroller stayed secure.

Tatiana Faust, of Seedlings Baby Store in South Tampa, said the “Bob” stroller is well warranted to last longer than other strollers.

“I’ve seen strollers run over by cars. Normally they’re in 9 million pieces. This one did incredibly well” said Faust.

Kellie Knight is now saving to buy a new stroller to replace the one she has. It is not recommended to use a stroller after it has been in an accident. She also says she plans to put on the emergency break every time she stops the car. – Summer, staff writer