Home » Drew Barrymore and Will Kopelman Stroll With Olive in NYC!

New parents Drew Barrymore and Will Kopelman were spotted out on Saturday having a nice afternoon out with their baby Olive in New York City. 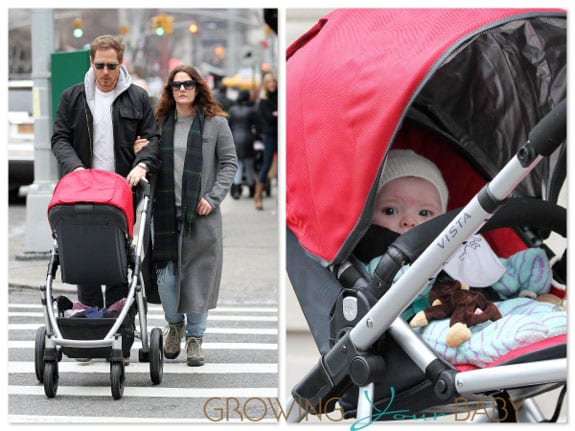 We haven’t seen much of Olive since her arrival in October.  The little cutie rode comfortably in UppaBaby’s Vista stroller, while bundled in a striped sleeper.

The couple walked arm in arm as they made their way through the city.  Married in July, Drew recently told Allure Magazine that Will ‘is her home now.’

“It makes me almost want to cry. He’s the father of my child, and I’m the mother of his child. I’m finally a part of a family, and it’s a miracle”

Proud of her earlier work, Drew can’t wait to introduce Olive to some of her movies,

“My first goal is to show [daughter Olive] E.T.—I cannot wait until she’s old enough—and then Ever After, because I want her to see that you can rescue yourself.”