Nina Langely, from Buckingham, had been experiencing shoulder and rib pain for weeks. Assured it was just a part of her pregnancy, she continued to deal with the pain. Then it became so unbearable that she believed she might be going into early labor.

“Nina wasn’t too concerned about her rib and shoulder pain throughout her pregnancy, as we were reassured it was pregnancy related,” Nina’s fiancé, Ed, told Mirror UK. “We only ended up in A&E on February 8th because Nina’s pain became so unbearable that we started to worry that she might be going into early labor.”

Upon examination, and a biopsy of her liver, doctors discovered that Nina had bowel cancer that had spread to her liver. They then rushed her off to deliver her son, Teddy, via Cesarean section. 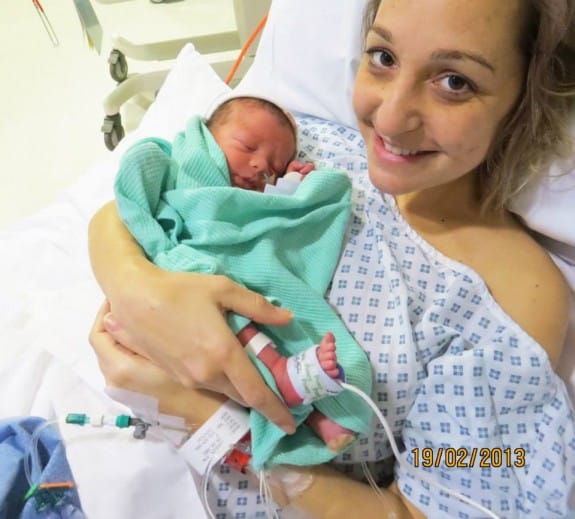 “The thought of meeting our new baby filled us with months of excitement, but suddenly, the experience turned into a living nightmare,” Ed said. “I never expected it to be cancer. I wouldn’t wish this pain on anyone.”

Born six weeks early at 5lbs, 13oz, Teddy is doing well. But Nina, who was diagnosed with adenocarcinoma liver cancer and primary cancer in her upper bowel, is awaiting chemotherapy, which is set to start next week, now that her body has had a chance to recover from the emergency cesarean.

“Waiting has been the hardest part. Nina has been in excruciating pain with her ribs caused by liver cancer,” Ed said. “But thankfully, we can start chemotherapy next week which, even though we are scared about, should hopefully shrink her tumors.”

But even with the chemotherapy, there are a lot of uncertainties about Nina’s futures, questions that no one can really answer. Ed says it’s been difficult, but he’s trying his best to stay strong for his fiancé.

“Nina is my whole world, and I’m completely devastated,” he said. “But I need to stay strong for Nina.”

And Nina, now a new mom, is doing her best to stay strong for their son, Teddy.

“It’s a petrifying worry for Nina that she won’t see our Teddy grow up, but with the help of specialist treatments, and those provided on the NHS, we aim to throw everything we’ve got at this cancer so we can stay together as a family.”

Ed has started a campaign to help raise funds for the specialists that aren’t covered under NHS insurance. Family, friends, and online supporters have helped donate, with the current total sitting at thousands of pounds to hel her fight this cancer, and hopefully beat it.

“I decided to put a status on Facebook as a cry for help, and that led me to setting up a fundraising page with the costs of life-saving specialist treatments that aren’t available on the NHS,” Ed said. “Losing Nina is not an option. I would devote my whole life to ensure she beat this.”