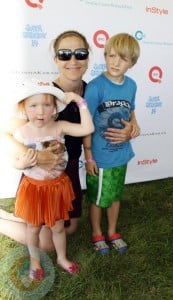 In her television interview on Thursday’s airing of Anderson, Edie Falco revealed that her children have their own ideas on how families are made. Having always been open with her two children, Anderson, 8, and Macy, 4, about their adoption, it seems that they just assume that is how every family is created.

“I mean, the word adoption has been a part of my house. I don’t know if they know that not every one of their friends is adopted,” Edie explained. “Maybe they think it’s just the way everybody comes into a family, but we are also living in a time where it’s just not the stigma it was when I was a kid.”

Edie also reveals that she is perfectly content with their current beliefs about how families are made.

“My son says, ‘So then the lady has the baby in her belly,’ and then I said, ‘And when the baby comes out she gives the baby to the mommy,” the 48-year-old actress said.

And she plans to get away with that description as long as possible. She also says she doesn’t see any harm in discussing it that way. She says they’ll get to the intricacies of how some mommies keep the babies and others don’t will be discussed later.

“The second you are handed a newborn, it is yours,” said the Nurse Jackie star. “It doesn’t matter what body it came out of. I’ve never felt more strongly about anything in my life.”

The Anderson show host also asked Edie what it was like adopting, citing how great the need for adoptive parents and how some couples worry that they won’t have a connection to the child.

Edie said that, for her, adopting just seemed like the right way to start a family, once she finally decided that it was something she actually wanted.

“I just knew at a certain point that it was time to raise kids, something I never thought I would do, actually,” said Edie. But things seemed to just fall into place and adoption would soon become a reality for her. “At that time, I was single and the idea to adopt came to me. I never really thought about all of the ramifications. I just knew this is what’s happening.”

She does admit, however, that being a mom of two adopted children has had its challenges (but what mom raises a child without facing challenges – adoptive parent or not?!). But she also says that, like all parents, you learn to think on your feet, you get through it and you keep on living life.

“It’s only as I travel through [that] I realize each challenge comes up, and you deal with it as you get to it,” she said.

So, adoption seems to be pretty normal to Edie’s children, but the actress reveals that there is something about their little family that seems a little strange to them – her fame.

While Edie is, undoubtedly used to seeing herself on billboards, in magazines and other forms of media, it is something that seems a bit more difficult for her children to adjust to.

“I was in a pool a number of years ago and I heard an airplane overhead. I was with my son and we looked up and there was an airplane with a Nurse Jackie banner on it going across the sky,” Edie reveals, giving a little chuckle while she shares. “I thought, ‘Alright, something’s got to give, this ain’t right.’ My son looks up and says, ‘Mommy.’”

Well, uncomfortable fame issues aside, it seems that Edie is doing a wonderful job at raising her two beautiful children.