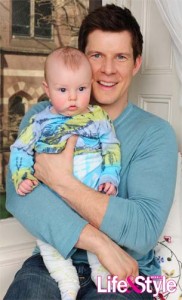 in this week’s issue of Life & Style Magazine.

During the interview Eric talked about the morning that his wife went into labor and the chaos that ensued when they tried to cab it to the hospital. Like a scene from a sitcom, the couple rushed to catch an NYC cab — only to have it run out of gas en route to the hospital!

“We had to pull over to the side of the highway,” Eric tells Life & Style.

“The driver got out and started waving his hands to hail another cab.”

Thankfully, the couple was able to make it to the hospital in time for the birth of 10 pound, 3 ounce Rylan Jaxson. (WOW!)

The couple still hasn’t decided whether a third is in the cards,

“We each come from two-children families,” Eric explains. “We think it’s a good, round number.” And a whole lot of work besides. “Two kids are definitely more work than one,” he says. “But they’re only going to be this age once. I don’t want to miss anything.”