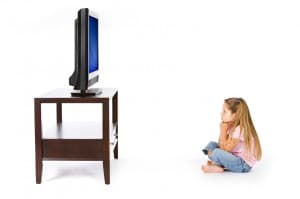 Excessive television time has already been linked to a number of adverse effects in young children, including obesity, language delay, attention problems and aggression. A recent study on the link between television viewing hours and antisocial behavior has now been added to the former evidence, further solidifying the importance of limited television viewing time among toddlers and young children.

Published in the Archives of Disease in Childhood, the new study analyzed the behaviors and television viewing time of more than 11,000 British children between the ages of five and seven. Parents of the children were asked to complete a “strengths and difficulties questionnaire” that would help researchers understand how well-adjusted the children were. Parents were also asked to report the amount of time their children spent watching television and playing computer games each day at the age of five.

According to the results, nearly two-thirds of five-year-olds watched between one and three hours of television per day, 15% watched more than three hours a day, and less than 2% watched no television at all. Research authors, from the University of Glasgow said that no link was found between computer game time and behavior issues. However, “watching television, videos, or DVDs for three hours or more daily was associated with a small increase in conduct behavior problems between the ages of five years and seven years, after allowing for other child and family characteristics, including parenting.”

Based on the results, researchers say that new parents may want to take heed and carefully monitor their child’s television viewing time.

“The study suggests that a cautionary approach to the heavy use of screen entertainment in young children is justifiable in terms of potential effects on mental well-being, particularly conduct problems, in addition to the effects on physical health and academic progress shown elsewhere,” the authors told Irish Examiners.

But for parents that are already seeing evidence of the effects of too much television time, the solution may not be so simple.

“Our findings do not demonstrate that interventions to reduce screen exposure will improve psychosocial adjustment,” study authors said.

Researchers suggest that, in these instances, interventions in respect of family and child characteristics could provide better outcomes. What’s more, authors suggest that it may be just as important to understand why parents are allowing their children to watch so much television.

“If five-year-olds watch more than three hours of television per day, research detects a small but noticeable negative effect on their conduct problem, though no effect on hyperactivity or emotional problems. So no cause for panic, but good reason to ask why some children spend so much time watching television – perhaps the pressures on their parents are too great, or perhaps there are no play spaces nearby. Or maybe what matters is how children watch television – research also shows that children benefit the most from opportunities to talk, interact, and play – and this can be done in front of the television as well as elsewhere.”