Just a few short years ago, little Sienna Smith might not have survived her birth, but thanks to the advances in medicine, this little fighter is growing and meeting her milestones. Most importantly, she’s in the arms of her loving parents, Sarah-Jane Harrup and Deryck Smith.

The journey started when Sarah-Jane was just 20 weeks pregnant. During the ultrasound, doctors spotted swelling on little Sienna’s neck. They feared it was a tumor. Even worse, they were concerned that the swelling would block her airway and prevent her from breathing after birth.

“If she was born naturally, there was a high chance she would not have been able to breathe and we would not be able to help her,” Dr. Javed Uddin told Daily Mail UK. “We knew something in her neck was pressing on her windpipe and we needed to plan her delivery very carefully.”

In the end, doctors opted for an ex utero intrapartum (EXIT) procedure because they believed it would give Sienna the very best chance at survival. EXIT surgeries have been used in recent years to help many infants with potentially fatal conditions. Still relatively new, the surgery is done with the infant is still partially within the womb. The umbilical cord remains attached to ensure the baby still has an oxygen supply. It is extremely delicate and it must be done with great care. 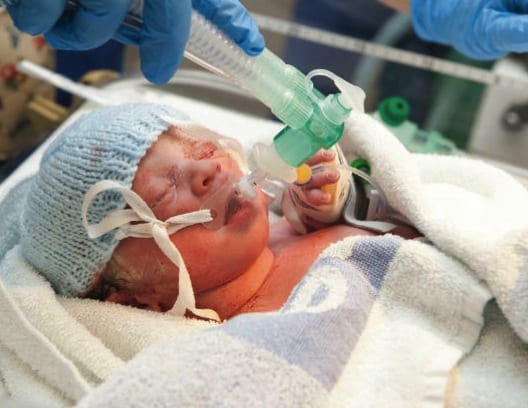 As they made plans for the surgery, doctors considered as many variables as they could. Even with their best-chance-option, there was a chance that Sienna might not make it. They also needed to time the procedure carefully; while they wanted to give Sienna as much time in the womb as possible, they also couldn’t risk her being born naturally. The ended up deciding on a delivery at 37 weeks.

Sienna’s parents had their own preparing to do as well. Unfortunately, it wasn’t quite as technical for them as it was for the doctors who were going to perform the delicate procedure.

“At first, Deryck and I were told if the lump was affecting Sienna’s airways, there would be nothing they could do if they couldn’t get a tube in to let her breathe when she was born,” Sarah-Jane told Daily Mail UK. “Then we would have to let her go. I was so scared. The operation had never been done [by the doctors] before and the doctors just did not know what they would find.”

But fear, worry and the possible heartache ahead couldn’t stop time. There was only one direction to go; they had to move forward and hope for the best.

When delivery day came, Sarah-Jane was taken into the operating room. Doctors performed a partial cesarean section, removing only Sienna’s head. The rest of her body remained within her mother’s womb, umbilical cord still attached. Tilting her head up, doctors then inserted the breathing tube successfully. Sienna was then delivered via cesarean the rest of the way.

Shortly after delivery, the swelling in Sienna’s neck started to go down. Doctors learned that it wasn’t a tumor, but a goiter caused by a thyroid condition. And just like that, her prognosis went from uncertain to extremely good. But, had it not been for the efforts of the doctors who delivered her, little Sienna might not have survived labor long enough to receive the treatment she needed.

“It is a very rare condition and we prepared for eventuality, including her not surviving. In the past, babies with conditions such as this would have died, but due to advances in technology, we can spot problems early,” Dr. Uddin said. “I’m really pleased to have completed the first operation of its kind here. The best thing was seeing the baby in her mum’s arms after the operation.”

And as she holds her daughter, who ended up weighing in at 5lbs, 6oz, Sarah-Jane says she couldn’t be more grateful for the doctors that helped make it all possible. And, despite the scary odds prior to Sienna’s birth, Sarah-Jane says that Sienna is a wonderfully healthy child who is developing just as she should.

“Sienna has to take medication, but she has reached all her milestones and is doing everything she should. She is trying to crawl and loves doing actions to songs as well as playing with her toys,” she said. “We cannot thank everyone enough for our beautiful daughter.”