Home » Expert: Kids Under 2 Who Watch TV Could End Up Developmentally Delayed 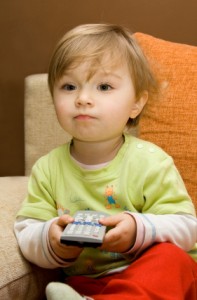 If your less than two year old child is already glued to animations or other series running on Television, it could be cause for serious concern, so says Prof. Stuart Shanker of York University in Canada.

According to him, television is a serious hindrance to the development of a child and as parents you do not need anything out of the ordinary like a special ‘educational DVD’ or the television to help a child learn. Just one-to-one interaction between the parent and the child is more than sufficient.

Prof. Shanker was in Dublin last month where he stressed on the point that parents should in no way be lured to the market that is full of CDs, DVDs and other play material that claim to educate and help develop a child’s intelligence.

He said, “Neuroscience proves that playing, touching, paying attention or talking at a level that comforts the baby, for example, are the building blocks for healthy infant brain development,”

He also pointed out the fact that as every child is unique; their development stages too are different. The most important thing therefore is for parents to devote quality time and be patient with their kids.
A child especially in the first year of his life is attached most to his primary caregiver or the parents. He listens, observes and learns from their expressions or gestures. It is the brain-to-brain interaction that is necessary for kids in order to later control and understand their emotions.

Therefore at such a important time, if the baby is watching videos, he is not interacting with  family and this could lead to delayed language or intelligence development.

“There is no such thing as a lazy child or a stupid child or a bad child. There are just kids that provide different types of challenges,” Dr. Shanker emphasized, “It is better that we understand them.”