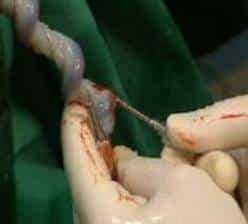 Cord blood has been used to cure a number of conditions, but can it really cure autism? Dr. Michael Chez, director of pediatric neurology at Sutter Neuroscience Institute in Sacramento, California seems to think so. He announced the start of an FDA-approved trial on Tuesday in which he and his colleagues will inject autistic children with their own cord blood in an attempt to cure their autism.

Autism is a neurodevelopmental disorder in which symptoms appear within the first three years of life. One in 88 children in the United States are diagnosed with autism, with boys being diagnosed more frequently (one in 54). According to Autism Speaks, a non-profit organization that provides resources to families dealing with autism, more children will be diagnosed with autism this year than with AIDS, diabetes and cancer combined.

Chez got the idea to try cord blood injections on autistic children after he had observed the seemingly miraculous cure of a little boy born with cerebral palsy.

Elisa Rudger of Sacramento, California, had a normal pregnancy. Her delivery was a different story, however. Her son, Rydr, stayed lodged within the birthing canal for seven hours. Eventually, docturs used a vacuum to remove him. When he finally emerged, little Rydr had no brain function, and he was not moving or breathing. Over the next six weeks, Rydr received care in the neonatal intensive care unit where he was eventually diagnosed with cerebral palsy.

Rydr’s parents had decided to bank his cord blood with CBR, an Arizona-based cord blood storage company, in hopes that he could one day be treated with it. Their wish came true when Rydr was two-years-old.

“I can verify he definitely got better,” Chez said. “All without extensive therapy.”

Chez hopes to achieve these same results with autistic children with no obvious link to their autism.

“What we are looking at is cases that don’t have an obvious genetic link,” Chez told FoxNews.com. “Patients that we presume something went wrong with their brains, which caused a change to autistic features.”

In other words, children have autism because of environmental or infection exposure.

“We want to see if there is any benefit to giving them an infusion to redirect the nervous system cells, which may have programmed themselves due to a secondary factor,” Chez said. “This may work on autism in different mechanisms in theory by modifying either the immune system or modifying the nervous system by indirect or direct methods.”

Chez will be using cord blood from the same bank as Rydr’s family. Because children will only be injected with their own cord blood, participants for the study have already been selected – there are 30 total.

Using the child’s own cord blood has many benefits – the study is less likely to create an ethical debate, the cells are less likely to have been exposed to environmental factors like viruses or chemicals, and the child’s body will not reject the infusion, since the cells are their own. Theoretically, however, should the study succeed, a sibling’s cord blood may be useable in the future, as long as the two blood types match.

“The next level of research will be to determine how that works,” Chez said.

Chez hopes results will be seen within six weeks, like they were with Ryder. Should that happen, Chez believes that it will mean that the stem cells are “talking” to the other cells within the body, causing the dysfunctional cells to become more functional. This may not be how thing happen, however.

“In theory, it would take more than that time for the nervous system to grow,” he said. “It might be more than growing tissue. It may be a simple infusion [however, and] it doesn’t have to travel to your brain.

Chez’s study won’t be the first to use stem cells in autistic children. However, previous studies weren’t controlled, or they used donor stem cells. So this will be the first study of its kind.

“The data is scattered with glimmers of potential benefits,” Chez said. “There are also patients who have gone to other countries and gotten so-called cord blood on their own; and we’re getting anecdotal Internet studies that we don’t want to be misinterpreted: We want to do this in a scientific way and make sure it’s not just these parents are so hopeful, they are seeing a placebo effect.”

Heather Brown, vice-president of scientific and medical affairs at CBR says they are thrilled to be working with researchers and clinicians like Chez “who are pursuing a scientifically-sound approach in evaluating new therapeutic uses for cord blood stem cells for conditions that currently have no cures.”