The Food and Drug administration is considering adding a recommended dosage for children under the age of two on children’s tylenol and other medication that are targeted at children.

In 2008, the United States Food and Drug Administration recommended that over-the-counter cold and cough medications not be given to children younger than 2-years old.

Despite this, a poll that was released in February revealed that parents are still giving their children these medications. What makes it worse is that they are probably guessing how much to give as it is no longer listed on the bottle, which could lead to an overdose.

Currently the label reads that for children under two, parents should consult a doctor. 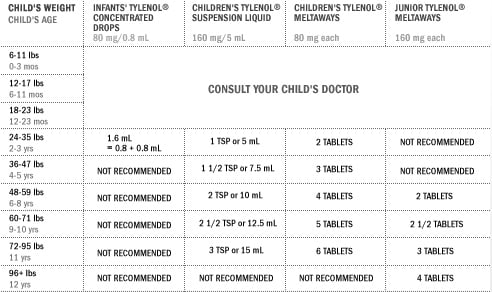 Unfortunately this isn’t much help for parents who have a child that comes down with a sudden fever in the middle of the night. If the new recommendations pass, parents will have a general idea on what dose their children should be able to tolerate.

Early this month, makers of the pain and fever medicine voluntarily decided to discontinue a more concentrated infant drop formula and sell only one liquid concentration. The availability of only a single concentration is meant to make it easier for parents and caregivers to give the correct dose.

The FDA is to meet next week to talk about whether they will change the labeling on children’s medication or not.