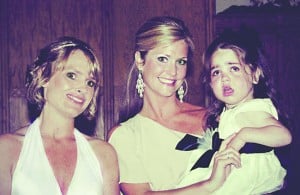 Bride Staci Hassman, left, spends a moment with Raegan Lombardi, right, and Raegen's mom Layne Taylor, center, at her wedding this past weekend

Almost three years ago, a 15 month old baby girl was fighting for her life because of kidney failure. She needed a kidney transplant urgently and her savior came in the form of Staci (Wiltgen) Hassman who donated one of her kidneys. Last week the blessed and healthy four year old Raegan Lombardi got a chance to meet Staci and also be the flowergirl at her wedding.

Staci had never met Raegan or her mom Layne Taylor when she donated one of her kidneys to the little child in 2008. She got to know about Raegan’s conditions through a website called  www.CaringBridge.org, that helps loved ones stay connected during critical illnesses.

Raegan was born on January 2007 and because of some birth complications, she went ten minutes without oxygen. Initially the doctors found that the baby was blind and could not hear, but though Raegan recovered from these conditions, her kidneys could not.

For the next 15 months she was in the hospital, first at the NICU in Dukes later at University of Minnesota Children’s Hospital, where she was on dialysis five days a week.

Staci met Raegan and Layne at the University of Minnesota Children’s Hospital then and the subsequent operation was a success.

“From day one, it felt like we were all family,” Staci said.

Since then, Staci hadn’t met Raegen although they were in contact. Then Staci called Layne to share her good news.

“Staci said, ‘I’m getting married,’ so that was that. There was no question we’d come,” Layne said. “The idea of Raegan being a flower girl was just the icing on the cake.”

Raegan, her mom and grandma Sue Taylor flew down to Iowa from North Carolina to attend the wedding of Staci and Paul.

“It feels kind of surreal. It’s amazing to see her and how well she’s doing,” Staci said. “It was a lot for them to come, and it makes this all even more special.”

Just a day before the wedding when the little girl met Staci for the first time after the surgery, she immediately connected with her, playing games and laughing. Layne said how Raegen had been practising saying Staci’s name.

“She’s become quite the social butterfly,” she added. “We had to throw kisses to everyone on the airplane.”

Paul and Staci themselves have five children who were as much excited to meet Raegen as Staci.

“The kids all know about Raegan,” Staci said. “They’ve been completely excited to meet her.”

Her 11 year old daughter kept texting Layne as how excited she was to meet them.

“They all clicked very well,” she said. “It was just very emotional to actually see them all together and have photos of my kids with her.”

For Paul too it was a heart warming re-union. He feels proud of Staci’s decision and also supported her when she decided to register for the bone marrow donors list.

As a coincidence the wedding date also fell on the same date when staci had donated her kidney to Raegen three years ago.

Says Sue,  “She wasn’t even supposed to live past her first week. It’s a miracle.”

Although Raegan had her health problems related to the immunosuppressive drugs she took after the transplant, she is growing up to be a normal, healthy girl.

“She loves books, and it’s all about Elmo,” Layne laughed. “And anything outside. She loves to be outside on walks or in the swings.”

For Raegan it was a golden opportunity to employ her social skills and thank the lady who saved her life by showering flower petals on her wedding day.