A German mom has defied the odds and welcomed a set of identical quadruplets. 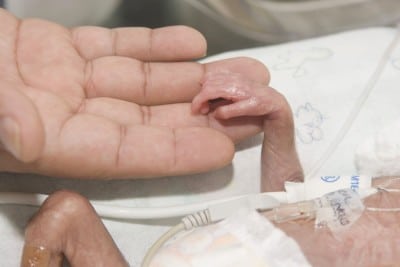 A completely spontaneous event that only happens in about one-in-13 million pregnancies, the four girls – Laura, Sophie, Jasmin, and Kim – arrived at 30 weeks gestation on Friday weighing between 980 grams and 1,100 grams.    “They came through the early birth astoundingly well,” a spokeswoman for the hospital said.

Doctors at Leipzig Hospital told the Süddeutsche Zeitung they were happy the mom was able to keep the babies in past the 28th week without any problems. Although single babies generally remain in the womb for 40 weeks, multiple often arrive much sooner.

Although there are risks for any premature babies, the chances for the four girls look very good. They will remain in incubators at the hospital for the next few months.

Mayor of Leipzig Burkhard Jung was made the girls’ first godfather and went to see them on Tuesday.

“Crazy,” he said afterward. “It is simply unbelievable. The most beautiful thing is that everything is complete. In short – all are healthy.”

The new mom will be allowed to go home on Wednesday, but she and her husband are able to visit the babies whenever they would like.

Because they are so fragile, the parents can only stroke the little girls in their incubators and talk to them.

But Ulrich Thome, a doctor at the hospital, said,

“When they are a little more stable, the mother can begin kangaroo care.” This means she can take them onto her chest, which does them enormous good. The babies are all being bottle-fed with their mother’s milk.

The new babies will join the couple’s five-year-old son.

Dr. Thome said the parents were, “of course somewhat stressed – they do not yet know how it will work when they are released from hospital.”