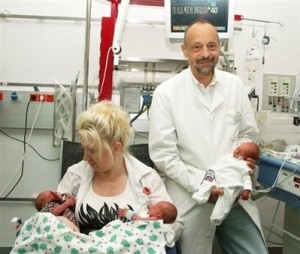 A 34-year old German woman has given birth to identical triplets, an event thought to occur in less than one in a million births.

The three girls, Alexandra, Antonia and Adriana, arrived within seconds of each other in mid-June and are healthy.

“At first we could not believe it: they were triplets and even identical triplets,”

said the mother, identified only as Karina P.

The triplets were delivered six weeks early as doctors were concerned the mother’s water could break too early, endangering the babies.

“As the triplets already have a healthy birth-weight and the mother is doing well given the circumstances, the whole big family is positive and happy and looking to an exciting and certainly not boring future together,” the hospital statement said.