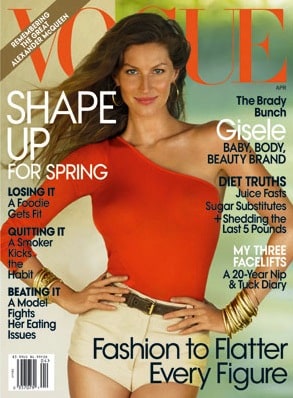 The supermodel, who admits she used to work 300 days a year, now lives in Boston with quarterback husband Tom Brady. It was in there that, with the help of a mid-wife, she welcomed her first child, Benjamin Rein, via waterbirth.

“I wanted to experience the transformation,” says Gisele. A midwife friend of hers came in from Brazil as did her mother; her husband was there too. Gisele meditated through the birth. “It was the most amazing experience of my life, feeling him come through my body. And once he was born, I never felt so empowered as looking at him and thinking, Oh, my God, we did it together!” 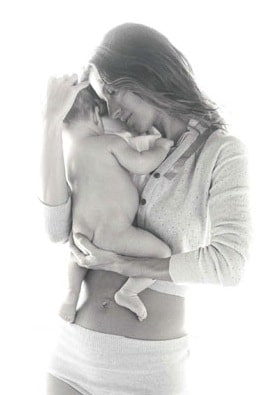 After his arrival, Gisele wanted to call him River ‘because I wanted something always flowing, immortal’ but Tom was not too fond of the idea saying, ‘There’s no way we’re going to call him River.’ So the two settled on a shorter version of her father’s name is Reinoldo.

As expected, she regained her figure almost immediately after delivery with no more exercise than some yoga on a mat in the living room.

But she has always been in shape. As a young child growing up in southern Brazil, she spent most of time outdoors, “like a little monkey, jumping from tree to tree in bare feet.” 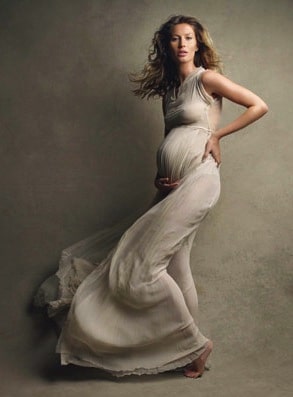 During her pregnancy she ‘did kung fu up until two weeks before Benjamin was born, and yoga three days a week. I was mindful about what I ate, and I gained only 30 pounds.’

Gisele also reveals that she kept herself out of the public eye for months while pregnant.

“I felt like my pregnancy was a sacred moment for me. I stayed in Boston and I didn’t work apart from the contracts I have, and then I only let them use my face.”

Her idea of family is a big family.

“I’m so lucky to have my little munchkin, and I have two because I also have John.” John, a.k.a. Jack, is her stepson, now two and a half, born to Bridget Moynahan after Moynahan’s breakup with Tom Brady.

Gisele says they doesn’t see John as much as they would like, but are in the process of building a place in Los Angeles to be closer to him. 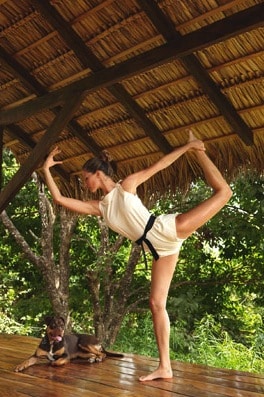 The couple also has a house in Costa Rica(used for the photo shoot) that they get away to for a month each year.

Gisele’s next project is the launch of her new beauty line called Sejaa. The products, which can’t be called organic because of the short shelf life, are called “natural,” created with ingredients that are held to a high standard of purity, with coconut oil acting as the preservative.

Sejaa will not be sold in stores but on a Web site, to create a community—”So I can give my little tips, and it’s not me telling anyone to have an awakening.”

On parting, the new mom offers Ms. Buck her two secrets to life:

“The first is wake up in the morning and be grateful you are here, alive and healthy. And the second is: Give.”

To read the whole interview please visit VOGUE.COM or pick up a copy of the APRIL 2010