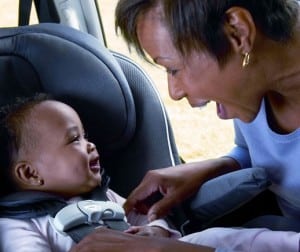 Great news for families today. Gear giant Graco has announced that they are committed to banning the use of four of the most toxic chemical flame retardants from all of their products. Graco is one of the nation’s largest children’s product manufacturers, selling nearly 1 out of every 3 baby gear products purchased in the U.S.

Previously promoted as necessary lifesavers, according to federal researchers and independent scientists, flame retardants added to foam and cushions actually provide no meaningful protection from fires.

In 2010 a study out of North Carolina revealed that young mothers have the highest amounts of flame retardant chemicals in their breastmilk. Flame retardant chemicals, known as PBDEs, are present in almost every item within the home and their side effects have been known to include  cancer, hyperactivity and thyroid issues. It has been found however, that the use of these chemicals does mean that your furniture or baby gear will fare better during a fire. In fact the CPSC tested two chairs; one with regular foam and one with foam treated with flame retardant chemicals and after 4 minutes both were completely engulfed in flames.

Plus, as the treated products age, the chemicals are finding their way into other products in our home through dust and we are putting these things in our mouth, which is possibly how they have been detected in breast milk.

“Clearly car seats have been a welcome development in protecting our babies from the injuries associated with car accidents,” said Gigi Lee Chang, CEO of Healthy Child Healthy World, a national non-profit empowering parents to protect children from toxic chemicals. “But protecting our children from one risk shouldn’t involve introducing them to another. As we wait for Congress to enact more meaningful chemical reform, we applaud companies like Graco for stepping up and protecting our children’s health.”

“I started the petition because as a mom, it blew my mind to learn that toxic flame retardant chemicals were still in the foam of so many of the products where babies spend the bulk of their time: strollers, car seats, nursing pillows, and more,” said Snow. “I’m grateful that Graco has responded to our concerns and can offer moms a little peace of mind.”

Thank you to Sara for leading this petition and helping educate families and corporations about harmful practices. One person CAN make a difference plus the 4,000 people who got behind her and signed the petition!

Via Healthy Child Healthy World and the Ecology Center