Home » Grandfather Donates Part of Liver So Toddler Can Live 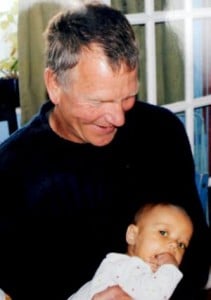 Fourteen-month old Owen Targett suffered from a rare and fatal liver disease that was set to take his young life. That was until his grandfather stepped up to give the most precious gift he could, part of his own liver.

Owen’s parents faced agony after agony as possible organ donations proved unsuitable for the toddler’s body. Doctors were looking at the end as the disease, biliary atresia, continued to do irreversible damage to his tiny liver. At the last minute, his grandfather stepped up with a gift of love. John Targett donated one-fifth of his own liver to help the toddler survive.

“Without the transplant, Owen might not be here now and he would definitely not have survived until this time next year because his liver would not have gone this distance,” said his mother Fleur.

“When the other livers proved unsuitable, we started looking for other options and John discussed it with doctors and decided to see how far we could go. He has saved Owen’s life.

“There are no words to describe what John has done. He is amazing and we love him so much – he is our hero.”

To Fleur and James Targett, the organ donation meant seeing their son full of energy and life again. As his body began to lose strength from the liver disease that was ravaging him. Now, Owen is a typical toddler with enough energy to play and smile like he should be doing.

“He is doing fantastically well and is so mobile. “Before the operation, he could only walk for five or six steps, but now he can get all around the house and go wherever he wants, and he smiles all the time. He is just so full of energy.”

This experience has also encouraged the Targetts to help others take about organ donation. They have been quick to point out the importance of the Livesavers campaign, a campaign to encourage organ donation for those who face long waits for a suitable organ to become available. Through organ donation, many people have been able to go on to enjoy long, healthy lives.

“It must be so hard for people to talk to their families about organ donation, but it’s absolutely essential,” she said.

“We know people whose children have not survived because of a lack of donors, so we fully support the Lifesavers campaign.”