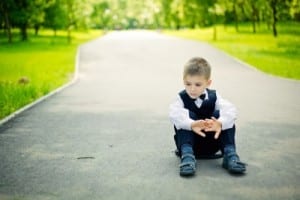 Despite the fact that one in 88 children is now diagnosed with autism, there are many aspects of the condition that remain a mystery to those in the medical profession. To make matters worse, every child with autism is different. This can make testing for autism difficult at times, especially where a child on the higher end of the spectrum is concerned. Still, there are behavioral traits that are pretty much across the board for all autistic children, and some new high tech testing tools have used the similarities in autistic children to hopefully increase both the level of care and the accuracy of testing for autism in the future.

The first tool uses one of the most common behavioral markers in autistic children – the reluctance to make or frequent or prolonged eye contact with other people – to hopefully help increase the accuracy of autism testing. To construct this gadget, researchers first took a pair of commercially available glasses that could record the focal point of the wearer’s gaze. They then took a video of a child with a front-facing camera on the glasses of the adult interacting with the child. That video was then processed using facial recognition software. Once combined, the two components were able to detect eye contact with 80 percent accuracy in a 22-month old child in a study at Georgia Tech’s Child Study Lab, a child-friendly experimental facility that is highly equipped with microphones, cameras and sensors that could cross-verify the accuracy of the glasses.

“Eye gaze has been a tricky thing to measure in laboratory settings, and typically it’s very labor-intensive, involving hours of looking at frames of video to pinpoint moments of eye contact,” said Jim Rehg, principal investigator, CBI director and professor in Georgia Tech’s School of Interactive Computing. “The exciting thing about our method is that it can produce these measures automatically and could be used in the future to measure eye contact outside the laboratory setting. We call these results preliminary because they were obtained from a single subject, but all humans’ eyes work pretty much the same way, so we’re confident the successful results will be replicated with future subjects.”

The other tool, a package of sensors that uses accelerometers to detect the movement of the wearer, was developed in collaboration with the Marcus Autism Center in Atlanta and Dr. Thomas Ploetz of Newcastle University in the UK. These sensors, worn on the ankles and wrists, can help detect episodes of problem behavior and classify them as aggressive, disruptive or self-injurious. This could help better the level of care for autistic children.

“These results are very promising in leading the way toward more accurate and reliable measurement of problem behavior, which is important in determining whether treatments targeting these behaviors are working,” said CSL Director Agata Rozga, a research scientist in the School of Interactive Computing and co-investigator on the Expeditions award. “Our ultimate goal with this wearable sensing system is to be able to gather data on the child’s behavior beyond the clinic, in settings where the child spends most of their time, such as their home or school. In this way, parents, teachers and others who care for the child can be potentially alerted to times and situations when problem behaviors occur so that they can address them immediately.”

Needless to say, these tools have a lot of people very excited about the future for autistic children and their caregivers.

“What these tools show is that computational methods and technologies have great promise and potential impact on the lives of many children and their parents and caregivers,” said Gregory Abowd, Regents’ Professor in the School of Interactive Computing and prominent researcher in technology and autism. “These technologies we are developing, and others developed and explored elsewhere, aim to bring more effective early-childhood screening to millions of children nationwide, as well as enhance care for those children already diagnosed on the autism spectrum.”