Home » How Clean is the Restaurant Playground? 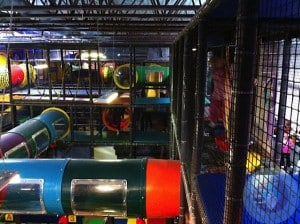 The old reliable fast food joint is a regular go to for many families.  Why do we love them so much?  We trust them.  Whether it’s good or not, the food is the same every time, we know what to expect.  And they’re clean.  The kitchen is clean, the dining room is clean the bathrooms are clean…but what about the play land?

After an unpleasant visit to a McDonalds play land, Arizona mom of four, Erin Carr-Jordan was so disgusted she launched a campaign to pressure governments across the US to enact legislation mandating the cleaning of restaurant playgrounds.

“It was disgusting,” Erin recalls.  “Stuff was smeared everywhere.  Hair was stuck in the corners.  It smelled terrible, and you couldn’t see out of the Plexiglass because of the filth.”

She has since visited restaurant playgrounds in seven states and has been equally grossed out at all of them.

She takes swabs of the surfaces and sends them off to a contract laboratory for analysis.  So far, her tests have revealed fecal coliform, staphylococcus and streptococcus.

That’s pretty gross, but experts point out that her swabs have not indicated the presence of any truly dangerous bacteria like salmonella, listeria, shigella, methicillin-resistant Staphylococcus aureus or pathogenic strains of E. Coli.

Let’s keep in mind that municipalities aren’t out with the Clorox wiping down the playground equipment in area parks.  Children come in contact with bacteria all the time, and according to Dr Carlos Lerner, a paediatrician at the Ronald Reagan UCLA Medical Center, they need to.

Exposure to bacteria is an integral part of the development of a healthy, properly functioning immune system.  Bacteria like E. Coli actually play an important role in our bodies; aiding in digestion and the production of vitamin K and amino acids.

“What’s missing from these analyses is viruses, like the flu and the common cold, which kids are particularly good at transmitting,” Dr. Lerner adds.

After reading Erin’s report, Dr. Stuart Levy, a microbiologist at Tufts University says, “You can’t make a conclusion about the relative danger from the bacteria mentioned.”

He does concede, however, that a certain level of hygiene should be observed, “They (restaurant playgrounds) should be cleaned, if not daily, at least several times a week.”

For Erin’s part, she is forging ahead with her cause, calling upon politicians across the country to ensure that restaurant playgrounds are made to meet certain standards of cleanliness.