It’s no secret that the bond between twins in unique. Many identical twins share the same thoughts, feel each other’s pain and are almost inseparable.  A set of identical twins in South Carolina took this bond to the next level this week when they welcomed their babies just an hour apart. 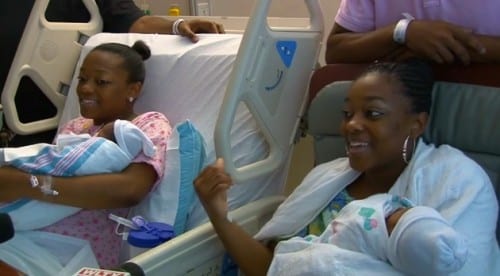 When identical twins Zaakira Mitchell and Shaakira White found out they were expecting just weeks apart many thought they had planned it.

“Everybody asks did we plan this?” said Zaakira. “That’s the most common question. No, we didn’t!”

The sisters, however, were due a month apart.

He was even more surprised when both women showed up on Tuesday in labour.

Shaakira had travelled to the hospital to accompany her sister, who was scheduled to meet with her doctor. Overdue, the plan was to induce her later that afternoon – until both girls went into labour.

Because Shaakira was due to welcome twins by c-section the doctors assisted Zaakira first, which delayed her sister’s delivery.

The dads-to-be Michael Mitchell and Frederick Boyd were excited,communicated via text message from the different rooms throughout the procedures.

“I was giving him tips,” Michael Mitchell said.

Shortly after 6:30 Zaakira welcomed Kadin Mitchell into the world.

One hour after that, London Boyd and her twin brother Landon made their appearance.

“It’s crazy to think it worked out this way,” The girl’s doctor David Ferguson said.

“They’re going to have fun growing up just like we did,” said White.

“I can’t wait to see them grow up together and share the experience,” said Mitchell.