Home » I’m a Superhero by Daxton Wilde and Sherry Wilde

This is an inspirational book written by Daxton and his mom Sherry while he was undergoing chemotherapy and radiation treatments for a brain tumor. 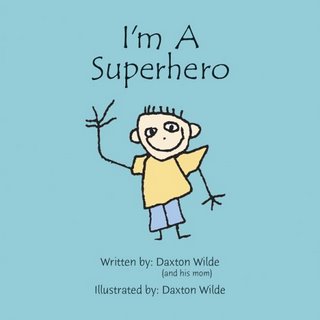 In May of 2000, Scott and Sherry Wilde rushed their four-year-old boy, Daxton, to Primary Children’s Hospital in Salt Lake City because of severe head pains. Doctors discovered a large cancerous tumor in Daxton’s brain and diagnosed him with a medullobalstoma. Daxton bravely battled cancer and never complained about any procedure or treatment.

During his illness, Daxton spent much of his treatment at home with his family where he worked on writing and illustrating his book, I’m a Super Hero, with the help of his mother. I’m a Super Hero is Daxton’s account of his life and experiences during his cancer treatment. Daxton’s story demonstrates his unfailing optimism and bravery.

I am always amazed at the strength children have when they are going through something life changing. Writing this book was probably a good way for him to keep his mind off of all the procedures being done.

The proceeds from the sale of this book originally went to print more copies, fund cancer research, and donate translated copies of I’m a Super Hero to children internationally. Now, the foundation works with hospitals and doctors’ offices to identify and help children with cancer and their families by providing assistance to ease the financial burdens associated with treating cancer.