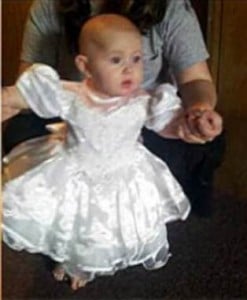 UPDATE:  We are sad to report that baby Angel has lost her fight.  She was taken off life support this afternoon by relatives after a 48-hour fight for her life.

“They told us they had done everything they could do for her and that her brain was no longer functioning,” Jack Brough, Angel’s maternal grandfather, said in an interview with The Courier-Journal shortly before the toddler died. “It’s one of the hardest decisions we’ve ever had to make, but we didn’t want her to suffer anymore. It is time for her to be reunited with her parents and her brother and sister.”

ORIGINAL POST: Over the last couple of days, we have watched the aftermath unfold in what was said to have been the deadliest tornado outbreak in the Midwest in forty years. Nine states, in total, were affected by the storm system, including Tennessee, Kentucky and Alabama, where the worst of the storms occurred.

Schools, homes and businesses have been left in nothing more than piles of rubble. Families now search through the rubble, trying to recover any last remains of their homes. But for some, the loss is much greater. The recent tornados took more than a home, a car, a business or a few personal belongings; they took what mattered to them most, their family. Currently, the death toll stands at 38 across all states; 14 in the state of Indiana.

Included in the death toll is the family of 20-month-old Angel Babcock: her father, Joseph Babcock, 21; her mother, Moriah Brough, 20; her older brother, Jayden Babcock, two; and her younger sister, Kendall Babcock, two months. Found in a field ten miles from her home, surrounded by the bodies of her parents and siblings, this blue-eyed, blonde-haired child was the only member of her family to survive.

Accepting the loss of the family is difficult for family friend Justin Henley.

“I don’t’ even want to believe it,” said Justin. “[Joseph] loved everybody. He never talked bad about anybody. He’s just a good person and he loved his kids a lot.”

“Kendall was a month-and-a-half old. And she was found in her car seat upside down,” added Sherry Young, Justin Henley’s mother. “Jayden was two-years-old and he was found under the rubble. Joseph was found on the opposite side of the road from his house. Moriah was found underneath a tree. Angel was found out in the middle of the field all alone. She’s 20-months-old.”

According to Beverly Lanham, the family’s former neighbor, Angel’s parents spent their last few moments, huddled on their hallway floor, praying and trying to protect their children from the funnel cloud that was quickly approaching.

These last moments were said to have been seen by Beverly’s boyfriend, Jason Miller who had warned the family to go inside and offered them a spot in his larger double-wide. But Jason wouldn’t make it back into his own home before being swept up by the tornado. Luckily, Jason didn’t suffer the same fate as Angel’s family. He survived, with several broken bones, and is said to be in stable condition.

Little Angel, however, is listed in critical condition, according to Cis Gruebbel, a spokeswoman for Kosair Children’s Hospital in Louisville, Kentucky.