Home » Does Inducing Labour Increase The Risk Of An Emergency C-Section?

If you’re approaching 42 weeks,  have high blood pressure or your water has broken but labour is not progressing your obstetrician will likely recommend that you be induced.  The concern often is that being induced will increase the chances of a c-section – something most moms-to-be doesn’t want.  A new study published in this week’s New England Journal of Medicine is looking to debunk this. 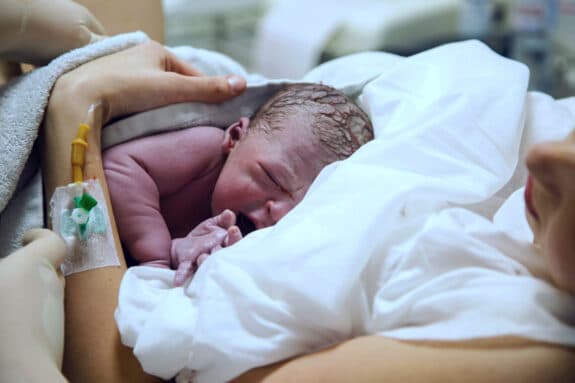 For years when faced with the option to induce a woman who has no medical need, doctors have told moms-to-be it does increase the C-section rate.

That advice was, however, based on some older medical research. Dr. Uma Reddy, an obstetrics researcher at the National Institute of Child Health and Human Development and her team studied 6,000 first-time mothers with uncomplicated pregnancies, to put the idea to the test.

Half the pregnant women followed the normal course of labor; the other half had labor induced when the baby was full term, at 39 weeks. They found that moms and babies did fine when labor was induced with a drug.

In fact, what they found was that that rate dropped from 22 percent among the women who weren’t automatically induced to 19 percent for those whose labor was induced.

Lisa Kane Low, immediate past president of the American College of Nurse-Midwives hopes the study won’t be used to nudge moms more toward this more medical approach to childbirth.

“Some of the things that go along with an induction may not be part of what they had planned for their overall birth experience,” Kane Low tells Shots. “It does require an IV, it does require that you have continuous electronic fetal monitoring to be safe, and it requires the use of different medications in order to start the labor process. And all those things need to be factored into what someone was hoping for their overall birth experience.”

“If you say to somebody ‘we could really reduce your risk of a cesarean by inducing your labor,’ people who are very fearful of a cesarean may say, ‘OK, I’m willing to [make that] trade-off and take the medical induction, even though that’s not what I might want because it’s going to reduce my risk.’ But, yet, the absolute reduction is very small, overall,” she adds.

She also notes that this study was done under optimal conditions. The hospitals all followed the latest recommendations about when to do a C-section, and the women were 23 or 24 years old, on average — which is younger than the general age of women who give birth.

Being induced also comes with its own set of issues. It can be more painful than labour that progresses naturally which can increase your chances of needing an epidural.