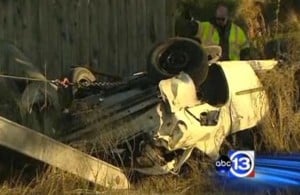 A police chase ended tragically yesterday when the pursued vehicle overturned, killing the driver and leaving a three-month-old infant dangling precariously from her car seat.

Police intercepted a 2004 Chevrolet Impala on Tuesday afternoon, outside Houston, Texas, as part of a robbery investigation.  The car had three occupants including, a three-month-old baby girl; the driver, who is believed to be the baby’s father; and a male passenger, 33-year-old Derick McMichael.

Police removed the driver from the vehicle, at which point, events took an ugly turn.  The passenger made a quick move for the driver’s seat and sped away, with the infant still in the back.

Detective Brian Clack recalls, “Once I noticed the passenger was moving around quite a bit, I attempted to get him out of the passenger side of the vehicle.  He had the doors locked where I couldn’t get in.”

Unable to prevent the passenger-turned-driver, from fleeing the scene, police engaged him in a five-minute high-speed chase through a construction zone.

Officers threw a spike strip into the path of the Impala.  The driver swerved, lost control and rolled the car, colliding with a fence and coming to rest upside down.

McMichael was killed instantly.  “When he tried to avoid the spikes, he started swerving, lost control; the tires were very worn on the vehicle,” reported Trooper Allen Williams of the Texas Department of Public Safety. 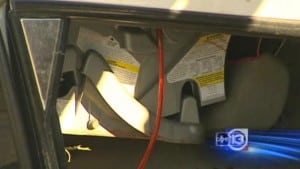 When they reached the overturned vehicle, officers heard the cries of an infant and realized the little girl was in the car.  They found her, secured in her car seat, hanging upside down.

In order to gain access to the baby, two officers kicked in one of the windows of the crumpled and twisted wreckage.  “We did cut the car seat out to remove the baby out of the vehicle because the baby was crying,” Trooper Williams recounted.

The little girl was air-lifted to a hospital in Houston, where she stays, in stable condition.  She is expected to have a full recovery.  This will, hopefully, be her first and last misadventure with the law.

The man believed to be the baby’s father; we’ll just call him Driver #1, remains in police custody for questioning.  – Jen R, Staff Writer